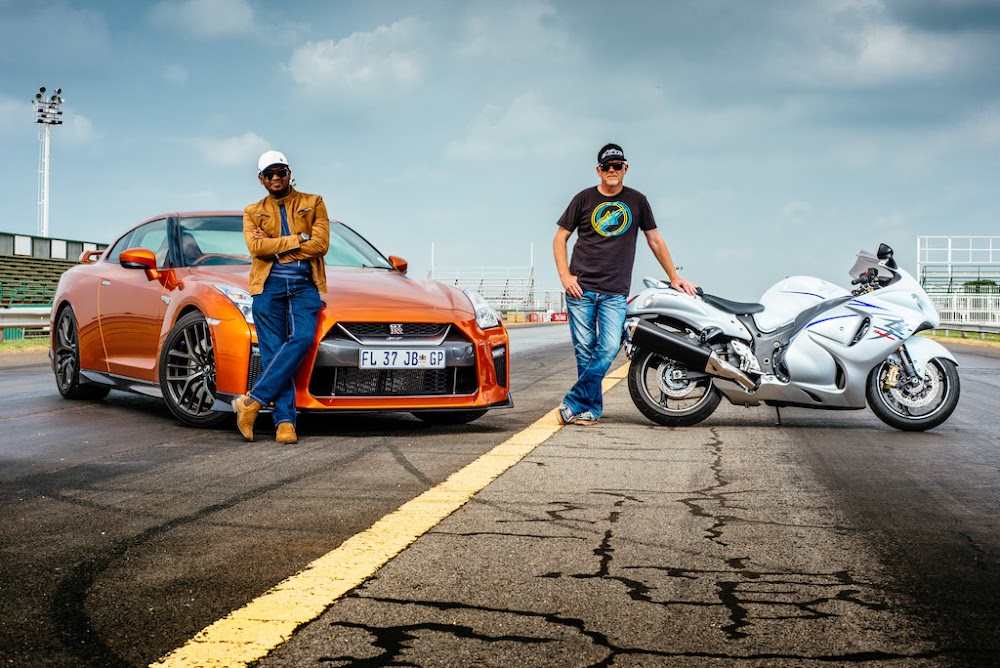 Join us as we take a look back at our motoring exploits from years gone by. This time, the calendar flips to February 26 2017, when we staged yet another motorcycle versus car showdown.

The law of averages had to be on my side. Finally, I would put paid to the ghosts that have haunted me since I was defeated the last time we staged such a challenge. The Alfa Romeo 4C and BMW M4 were both vanquished by bikes. Those listless nights, tossing and turning, my sore ego taunted by visions of two-wheeled machines and smug riders clad in unflattering leather.

It would all be a thing of the past, because I brought the right weapon to this duel. Oh yes, I was at the helm of the iconic Nissan GT-R — in all its spray-tanned orange glory. And my colleague in the tight onesie? Well, he seemed to have arrived on a rather bloated-looking Suzuki.

It was flanked by another, smaller one: it looked like the motorcycle equivalent of Mutt & Jeff. Cute. But given the immense output at my disposal (408kW and 632Nm) and the prospect of a sprint time under three seconds, I was confident.

And there was the added assurance of traction. The power in the GT-R is ploughed forcefully to all four corners — unlike the single wheel on the motorcycle, tasked with applying all that grunt to the bitumen.

We parked abreast on the asphalt. I engaged my launch control. The tachometer settled at 4,000rpm and I let go of the brake. Boom!

Squealing off the line, I could see him alongside in the periphery. I snatched second gear. By then, the equal footing had eroded into a discouraging chasm: he was gone. Blast.

A few more runs revealed a similar result, with the gap growing even bigger after he mounted the smaller motorcycle.

Defending myself and the GT-R, I could blame the slippery surface of Tarlton International Raceway. Although our loss was not by a devastating margin, it must be said — even our motorcycling colleagues conceded.

Alas, we are not going to give up. If at third you don’t succeed…

I have my poker face on. Brenwin is strutting around like a man who knows his moment of glory is about to arrive. I’m trying to portray how little I’m impressed by his Japanese hatchback, but having just witnessed a practice launch, the suntanned Datsun has got me just a little worried.

The GT-R surges off the line amid a cacophony of screeching tyres, whistling turbos and a solid background roar from its raucous V6. No doubt about it, this is a car that looks as fast as a bike.

I steady my nerves with a bit of cold, hard logic. No way I’m going to lose because a bike is essentially an engine with some wheels and a seat, and that means weight is always on my side. Brenwin may have power at his disposal, but it comes in a heavy package. He’s dealing with 0.21 kW per kg, while even with my weighty presence the bike will still be good for 0.5 kW per kg.

I’m using Suzuki’s Hayabusa for this head-to-head. It may be a tad porky and bereft of any clever electronics, but it has a stable chassis and a huge 1,340cc in-line four-cylinder motor that generates torque like a runaway steam turbine. As the flag drops, I feed in the clutch at about 5,000rpm and the Hayabusa digs in, slams me into the seat hump and immediately jumps into a lead.

There’s plenty of room for me to get tucked in and concentrate on perfecting the two gear changes I need to pass the 400m line maxed-out in third gear. It’s a clear, if not actually humiliating, thrashing of the car.

Smugness begins to flood through my every pore. I attempt a fleeting impersonation of a gracious victor before reverting to character and gloating like a child with the last sweet in the packet.

Brenwin comes out with an impressive list of excuses, one of which is to blame me for bringing the wrong bike.

The GT-R can handle corners even better than the straight bits, yet my Hayabusa can’t. No worries, I have a particularly exclusive Ace up my leather sleeve: the 2017 Suzuki GSX-R1000.

Much cajoling, bribing and calling-in of two decades’ worth of favours wangles me the first South African ride of Suzuki’s new flagship sport bike. I get one practice run and then it’s straight into the race.

I glance over at Brenwin and he’s still smiling, but I know that in just over 10 seconds that smirk will be replaced by a frown that will stay with him for days.

The GSX-R is a small, lightweight sport bike designed for fast laps and it’s powered by a 148kW, 999cc four-cylinder engine with variable valve timing. It’s a heavily MotoGP-inspired machine and by all rights it should be an awkward, wheeling, lurching pig of a thing to get off the line. But it isn’t.

Some magical engineering that has increased stability without compromising agility means I get a good start and the GSX-R proceeds to disappear even further into the distance than did the Hayabusa. Oh dear.

I abandon any pretence of gentlemanly conduct and go straight to the gratuitous abuse. If Brenwin wants a car to take it to the bikes, I suspect he’ll have to use his imagination.

As he shuffled dejectedly off into the distance, I did hear him muttering something about a limousine. Sounds like he’s on the right track...

Union blasts Transnet over R9.9bn worth of irregular spending

Watch-outs of the week: travel pains, bank fraudsters and a false sense of security with warranties

AmaZulu and Orlando Pirates share the spoils in Durban

Did You Miss? The Sunderland Echo this week

Hamilton on course for record win after Portuguese pole