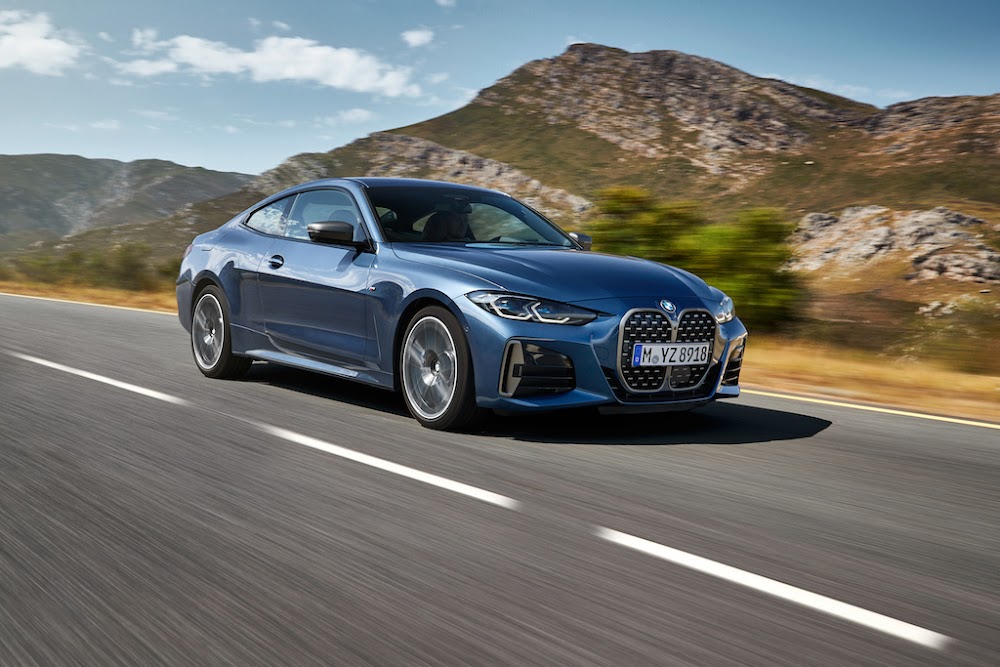 BMW on Tuesday evening launched its all-new 4 Series Coupé to the world - and wow, does it ever have a pair of kidney grilles on it.

A stylistic hat-tip to the 2000C/CA/CS models from the mid-1960s, you can be sure that this design feature will polarise the opinion of car people everywhere. On the plus side, they do provide clear differentiation from the comparatively plain-Jane 3 Series (the 4 Series' more sensible four-door sister).

But those grilles are not the only things to have swollen on the new 4 Series Coupé. Dig through the press release and you'll find that its track has increased by 28mm at the front and 18mm at the rear. Measuring 4,768mm in length, it's 128mm longer too - 41mm of this can be found in the extended wheelbase, something that should translate to a better ride and improved stability. Height-wise, the new 4 Series is 57mm lower than the 3 Series.

Inside the cabin you will be greeted by a dashboard that's almost identical to the one already being used in its four-door sibling. An 8.8-inch infotainment system comes standard, as does a black panel instrument cluster centred around a 5.1-inch colour display. Should you wish, however, you can choose to specify a larger 10.25-inch infotainment display, as well as a fully digital 12.3-inch instrument cluster.

As with most BMW products, the extras list is vast and you can really go to town in making the new 4 Series Coupé your own. Thankfully (wireless) Apple CarPlay and Android Auto come standard on all models as does park distance control with front and rear sensors.

Initially three 4 Series Coupé models will be making their way to SA. Kicking things off will be the "entry-level" 420i, powered by a 2.0-litre four-cylinder turbocharged petrol engine delivering 135kW and 300Nm worth of torque. Expect a 0-100km/h time of 7.5 seconds and a maximum speed of 240km/h.

Both of these models are rear-wheel-drive and both come mated exclusively to eight-speed Steptronic transmissions.

The flagship of the range will be the M440i xDrive. Packing a 3.0-litre six-cylinder in-line petrol engine plus a 48V mild hybrid system, this range-topper muscles out 275kW and a whopping 500Nm. BMW claims that it will reach 100km/h in 4.5 seconds and rocket on to an electronically limited top speed of 250km/h. Optimal traction in all conditions is provided by the xDrive all-wheel-drive system. As with the lesser four-cylinder models the M440i is fitted only to an eight-speed Septronic transmission – the manual is dead.

Good news for enthusiastic drivers is that all new 4 Series Coupé models can be equipped with BMW's optional M Sport Pro package. An improvement over the standard M Sport model, ticking this box bolts on 19-inch M light-alloy wheels, an eight-speed Steptronic Sport transmission and a rear spoiler, as well as a mighty Harman Kardon surround sound system. The latter apparently aids in piping artificial engine noise into the cabin (to many of you this will be as controversial as those aforementioned vertical kidney grilles).

The new BMW 4 Series Coupé will arrive in SA during the fourth and final quarter of 2020, although pricing is yet to be confirmed.