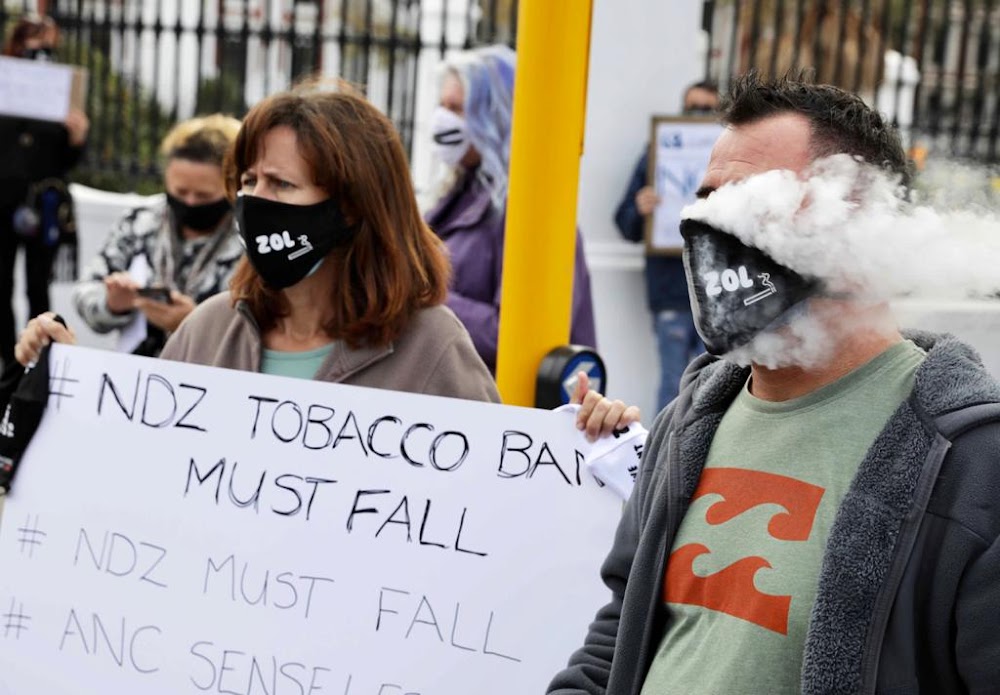 Smokers marching against the ban on tobacco products said their rights to protest were violated when police officers waited for them at the Union Buildings in Pretoria.

The planned protest - started and shared via a Facebook lobby group called Unite Against The Tobacco Ban  - was expected to be held at the Union Buildings on Tuesday and in nine other places around the country. Marches went ahead in Cape Town and Durban.

When TimesLIVE arrived in Pretoria, a few protesters - all wearing masks - also arrived, but were turned away by police. The officers said the gathering was illegal.

Conrad Marshall, who lives in Pretoria, said he was disappointed.

"We have the right to protest. To say we don't under the Disaster Management Act is not correct," he said.

Marshall said he arrived at the Union Buildings at 11.30am.

"The police were already here. The captain came and showed us the regulations and said we were not allowed to be here. They warned us," he said.

Marshall, 49, who is not a smoker, said he was there to give his support.

Naidine Alers, 50, who was also there for the march, said government was not being fair to smokers.

"We are already paying R500 for a carton of cigarettes. It's not right," she said.

She said it was not fair that the ban on alcohol was lifted while the ban on cigarettes continued.

Paul Blackburn, who was leading the Pretoria march, said it was obvious that government knew about the protest, which was why police were sent.

Blackburn said the captain showed him the regulations, which stated that gatherings were prohibited.

"The place [Union Buildings] is locked. He told us we need to leave or we will be arrested. I have handed the memorandum to the captain, but unfortunately he said there is no one to receive it," he said.

Blackburn said the concern was that government was not listening to the people.

" It's clear to me they don't care what people say. The people have no say or rights. It seems like democracy is dead in South Africa," he said.

Byron Bernad, director of the Human Rights Front of South Africa, said: "It really upsets me because the whole point of the protest was because human rights are being violated. You can't just take human rights from someone.

"We came here and realised the only people who are here are the media because they have permits and are allowed to be here. So protesters are not allowed here. For me it's another violation of rights," he said.

In Cape Town and Durban the marches went ahead as planned.

Protesters staged their march outside Parliament in Cape Town, demanding that the ban on tobacco, tobacco products, e-cigarettes and related products be lifted with immediate effect.

Durban resident, Charlene Wannenburg, is not a smoker but was one of four people who picketed outside the Durban magistrate's court.

"Basically, I am here to support the spaza shop man because that's his income. He sells  loose [cigarettes] at the side of the road," said Wannenburg.

She said she was also supporting distributors and sales representatives.

"Right now you are crippling them," she said.

Since the start of the lockdown, smoker Sue Pienaar has been smoking counterfeit brands because premium brands were expensive.

"We haven't had access to  legal cigarettes since lockdown because they cost more than R1,000 a carton, so we have been buying  illegal ones for about R650. I have a sore throat because every day I'm smoking a different brand. A packet lasts me a day and a night and maybe half of the morning, so I am not a heavy smoker," said Pienaar.

She said her mother, who is 80 and has been smoking for 62 years, has been having major withdrawal symptoms.

"All we want is our right and choice to smoke our cigarettes. We don't want to fight with the president or ministers. Just give us our smokes, please," said Pienaar.

Protester Adrianne Gopper, said: "I am a smoker. It's my life and my choice. I decided to start smoking from the age of 23 and taking that away from me is against my constitutional right. We are paying ridiculous prices."

Smokers headed to to parliament on Tuesday to protest against the cigarette ban imposed by government to curb the spread of Covid-19.

Others read: “We want to zol.”

Joy Smith, 70, who joined the growing number of protesters at 12pm, said she had been smoking for 50 years.

“A ban like this will not stop me from smoking,” said Smith.

“Mrs Dlamini-Zuma is using the Covid-19 pandemic to further her own agenda. She might hate smoking, and she is entitled to her opinion. That’s her right.

"She must not lie. She stood in front of the nation and said she had 2,000 people supporting her. When a tobacco company analysed that, there wasn't 2,000 supporters.

"Another thing she lied about is that she said she is guided by the World Health Organisation (WHO). But WHO has never told any country to ban cigarettes. South Africa is supposed to be democracy and there is supposed to be consultation, but where is consultation? I have been smoking for 50 years. I am very upset.”

Anna-Marie Beetes, a member of the Facebook group #SmokersUnite, said it has been an unbearable nine weeks without cigarettes. She said they were tired of “smoking illegal cigarettes” and that “we are busy with the lawsuit against the government”.

“We are not only keyboard warriors. We actually went out and challenged the ban. How does that make you feel as a smoker?" she asked.

“It’s unconstitutional. It’s my right to smoke. I am addicted to it. In South Africa, cigarettes have been sold for more than 100 years legally. How can you take that away? Who did you consult when you took addiction from them?”

Another protestor chimed in: “I was not asked.”

“Thank you,” Beetes responded. “No one asked me. So this is a constitutional right that was violated. This is not fair. I have no problem with the alcohol ban being lifted. I think it was ridiculous to ban that as well.

"It’s winter and we are all going to start getting the flu. If we get it, we get it. If you have a strong immune system I think you will live through this. It’s researchers all over the internet;. It’s not coming from me."

Beetes said more people were on their way to parliament.

“Most people stayed at home because of social distancing,” she said. “We don’t want to be criminals, we just want to smoke.”