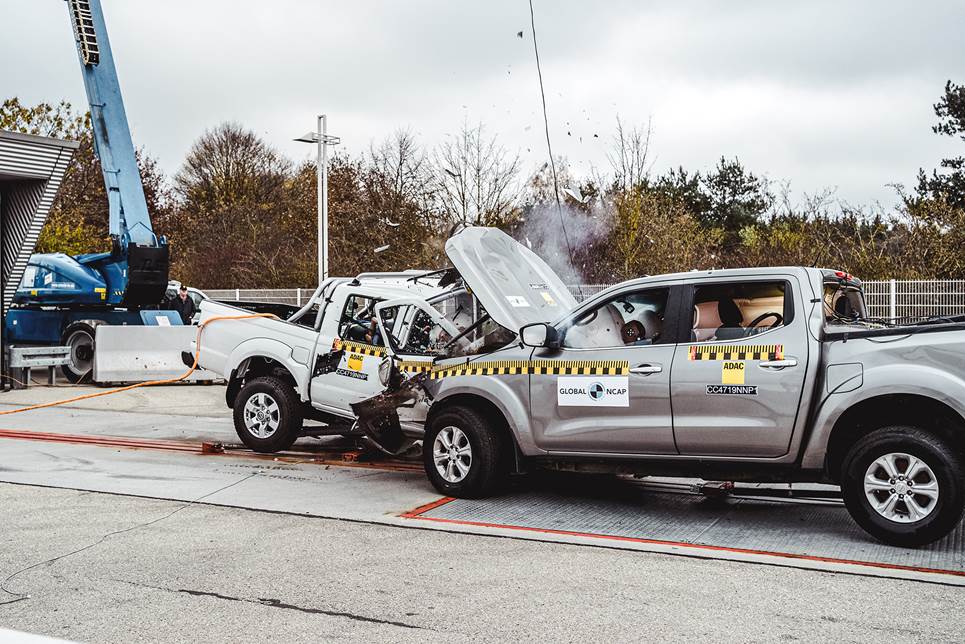 A Global NCAP test has revealed the stark differences in crash safety that can exist between new and old generation vehicles.

In a 56km/h head-on crash test between the Nissan NP300 Hardbody and new-generation Nissan Navara, the Hardbody performed significantly worse. The driver in the badly crumpled Hardbody would likely have died from their injuries, but the driver from the Navara would have walked away, according to David Ward, chief executive and president of Global NCAP.

"The difference in crashworthiness is extraordinary,” he said.

Both vehicles have ABS brakes and airbags but the Navara is fitted with electronic stability control, which is absent on the Hardbody.

Global NCAP's crash test was between a new 2019 African Nissan Hardbody and a second-hand 2015 Navara NP300 built in Europe. The latter is the same Navara that was introduced in SA in 2017. The NP300 Hardbody is an old generation Nissan one-ton bakkie that continues to sell in SA and elsewhere in Africa alongside the new-generation Navara.

The NP300 Hardbody was previously tested by Global NCAP and the Automobile Association (AA) in 2018 as part of the #SaferCarsForAfrica campaign, and received a zero star safety rating after the vehicle structure collapsed to the extent that the airbags were ineffective.

The Nissan Navara was tested by Euro NCAP in 2015 and achieved a four-star adult occupant rating.

Launched to coincide with this week’s third Global Ministerial Conference on Road Safety in Sweden, both the crashed vehicles will be on public display as part of the "People’s Exhibition" in Stockholm Central Railway Station. Global NCAP is partnering  the Global NGO Alliance for Road Safety in hosting the exhibition. The call to action from the #50by30 themed display will be the adoption of a new target to halve road deaths and serious injuries by 2030 by governments worldwide.

“These results are extremely worrying and point to a major deficiency in the quality of vehicles available in Africa,” said Willem Groenewald, chief executive of the AA.

“We have for a long time been concerned that vehicles available in Africa are inferior to those in other markets such as Europe and Asia, and these results seem to confirm that concern.”

He said it highlights the need for stricter regulation of standards and tougher controls in terms of allowing inferior vehicles on African roads.

'We have been flooded with calls': government on food delivery services during lockdown

K24 Duo Delights Kenyans on Air With Their Dancing Skills

All Blacks coach doubts Wales, Scotland Tests will go ahead