'Lockdown an opportunity to deal with homelessness': Western Cape government 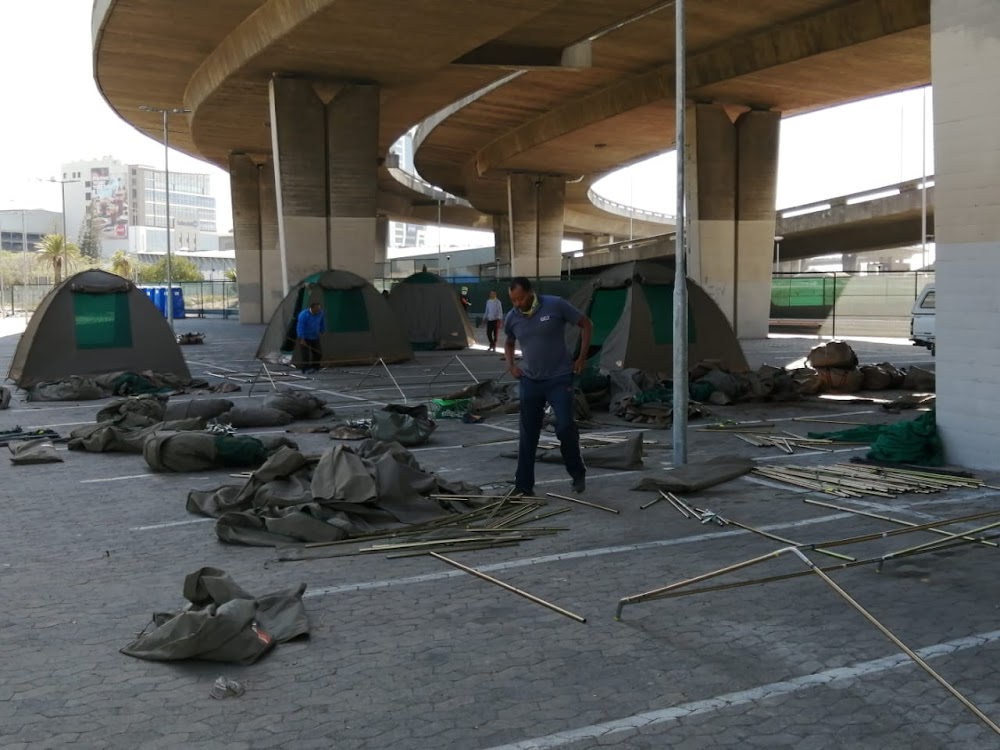 The City of Cape Town says the coronavirus pandemic has given them an opportunity to tackle the city's massive homelessness problem with the urgency it deserves.

But homeless people say that without proper therapy for drug addicts and medical facilities to treat underlying diseases, these shelters could become a hotbed for transmission of the deadly SARS-CoV-2 virus which causes the Covid-19 disease.

According to mayoral committee member for community services and health Zahid Badroodien, the first phase of a plan to get the city's estimated 4,000 street people into homeless shelters will create up to 1,000 new beds, permanently.

But this means only a quarter of people will be off the street as the project is rolled out in Cape Town's CBD over the next week. On Saturday the army and the police had been trying for two days to curb movement in the Cape Town city centre in line with the national lockdown to stop the spread of the virus.

But their task is made impossible by hundreds of homeless people roaming the streets, still trying to access handouts from the few essential services staff coming into the city.

Access to alcohol is banned under the current lockdown restrictions but while food and money may be scarcer there is still a flourishing drug market for Cape Town's addicts.

Christiaan van Staden who is homeless and a heroin addict, says he still has enough heroin to last him two days, and even less food.

Homeless people in the Cape Town CBD stand in queues where IPJ and with the help of other NGOs are handing out soup on #Day2 of the national #lockdown many homeless people went to the Culemborg Safe Space where the city was erecting tents for some of the homeless. #Covid19 pic.twitter.com/JzXE5Xa1bo

He says that many people are afraid that once they enter the homeless shelters they will not be able to use the drugs they are hopelessly addicted to and with withdrawal symptoms that can make a user pray for death, some are likely to take their chances on the streets.

He said besides an addiction, many people suffer from TB and are infected with Aids.

“I suppose you'd only be able to smoke cigarettes. But what about the heroin addicts and methadone. For heroin addicts methadone is very important. Without it people are going to die here,” he said.

But he said the drug use, which itself causes health problems, and people being in close proximity of one another would allow the virus to spread very quickly.

“People will be smoking Mandrax, tik, shooting heroin, people are going to be sick. If they do not organise a humanitarian effort to at least get some methadone to the heroin addicts here it's going to be bad. I know, I'm a heroin addict, I'm worried, I'm stressed. I still have a little bit, but it's only going to last me two days,” said Van Staden.

Badroodien says health services, ablution, clean water, and food will be available at the facilities but he acknowledged that therapy and psychological help for people with addiction and mental disorders will be necessary.

Van Staden says he has experienced heroin withdrawal in prison before.

“You first get cold, then your body gets sore, then you start throwing up bile. It lasts for about a month, where you are sick as a dog and you can't even walk, you can't even eat,” he said.

But underneath the mind-numbing haze of substances, the flight of people from Cape Town has brought about deep fears among the homeless — sending them to the shelters, away from abandoned parks and streets. It's the same fear that brought Van Staden to tears during TimesLIVE's interview with him, the fear brought about by the realisation that if he contracts the virus he may never see his family again.

Cape Town homeless person Christiaan van Staden breaks down as he realises he may never see his family again. He is one of 6000 homeless people in the city waiting for emergency accommodation which is being prepared for them. #COVID19 #LockdownSA #COVID19SouthAfrica #Day2 pic.twitter.com/QPHu6IQvfP

“I don't know what's going to happen, all I can say is, I pray to God that we survive it ... I actually pray I see my family again,” he said choking on his tears.

A soup kitchen is still active outside the existing safe space which was set up for homeless people a few years ago.

Unlike many homeless shelters, the safe spaces will allow couples and family units to stay there.

“We are looking to inject about 800-1,000 permanent bed spaces so that even after Covid-19 the city and the street people have access to these facilities that will remain active,” said Badroodien.”

That’s very important here because for the past four years, the city hasn’t been able to increase the number of permanent beds for street people so we have a very unique opportunity to be able to do that.

“Another question I’m being asked is why has it taken the city so long. When Mayor Dan Plato took over he very rapidly established the homeless agency committee, Section 79 committee, that sees specifically to the issues relating to homeless people, to shelters, to service providers that provide feeding schemes and so on,” he said.

“What Covid-19 is allowing us to do is to take all of those conversations that have been happening over the past few months, and to light a fire under politicians and officials to make sure these solutions that we’ve been looking at can come online very quickly, and for the long term,” said Badroodien.

He said that the people would be “encouraged” to move to the new shelters voluntarily but he said that although the city's staff would not be forcibly relocating people, the army and the police have clear directives to enforce a lockdown and people may be forcibly relocated to the shelters. Along with the basic services there will also be a strong law enforcement presence to ensure that people are not carrying dangerous weapons or illegal substances.

Badroodien said that as the need arises for more beds the city would hastily move to make more locations available and set up shelters.

“What we will need to do is should there be an ongoing need of people wanting to access these facilities voluntarily, then the city will get back to the drawing board and, in partnership with the provincial government, identify additional spaces which is what we’re currently doing,” he said.

“We are really appealing through our partners, through our stakeholders offering feeding schemes to inform people about this location, of the location in Bellville, so they can start moving them there so that we can very quickly take them and house and assist them,” he said.