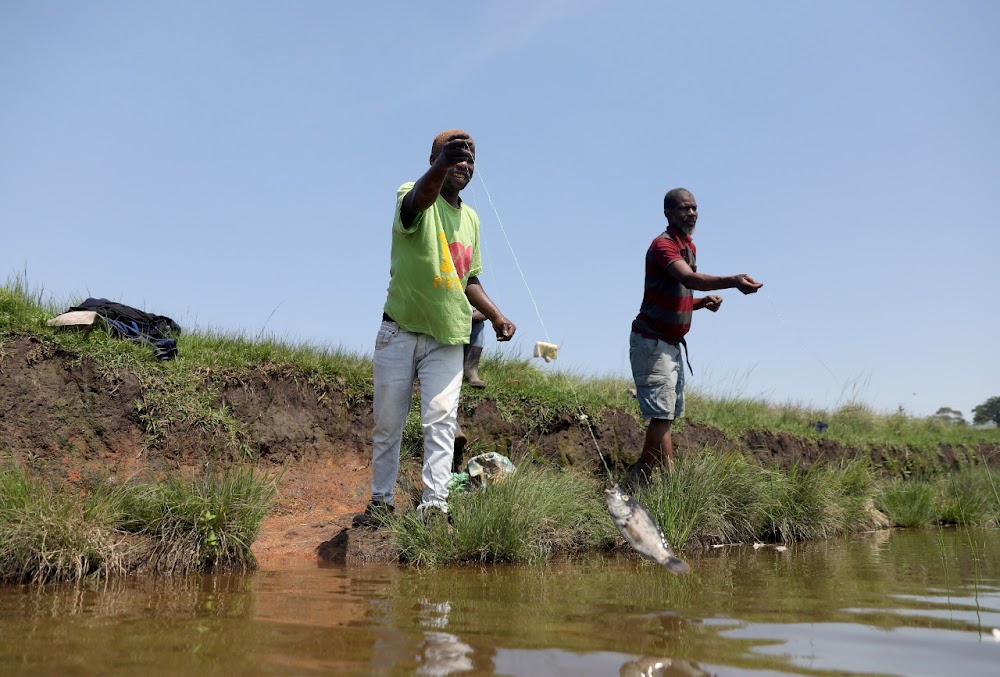 Not far from the Valley of 1,000 Hills in KwaZulu-Natal lies a calm and clear dam that goes unnoticed by almost everyone — except the surrounding rural community who rely so heavily on it.

The dam offers a literal lifeline for many. Community members line up on the banks of the dam with small hooks attached to a piece of fishing line. Earthworms are hung on the hooks to attract hungry fish. That is all they need.

The water is so calm and clear that the reflections of the fishermen rest on its surface while they wait for the bait to be taken.

“Ngawubamba, ngawubamba [I caught it, I caught it]”, shouts Bhekisisa Zondi, 32.

He’s smiling widely, having made the catch on his first attempt of the day.

Inchanga locals, including Zondi, said the dam does not have an official name. They call it the “Father Albert Hanon Dam” because Father Hanon, a Catholic priest who ran the St Theresa mission in the area, built the dam to avoid underground streams of water creating a soggy wetland.

Little did he know that years later the dam — which does not go dry because of its subterranean water supply — would feed the impoverished community he once served.

His grave, perhaps fittingly, is nearby, almost watching over the goings on at the dam.

“We come here to catch fish so we can eat with our family”, said Lindokuhle Mtolo, another community member.

While the dam is a “fish pond” for the community, they are fearful to go inside or swim in its clean waters.

“Be careful. You may not come back,” said Wonderboy Mackey after the photographer stepped into the water to get a better picture.

According to the community, several people have drowned while swimming. They also believe there is a snake that frequents the dam, and that those who drowned were eaten by it. Local legend suggests the snake comes down to drink and feast every day at midday.

“You are entering at its time of drinking,” Mackey warned.

“Please be careful. We are not going to help you because you have been warned.”

Despite these fears, the dam continues to be crucial to the community’s survival.

Grego Nkune, 50, who has long been fishing in the dam, said: “One day when I walked past I saw fish jump up and down. The following day I bought my hook and a fishing line. I catch six to seven fish a day, and that is enough to feed my family.”

While fishermen throw their fishing lines into the water, cows quench their thirst.

On the south side of the dam some members of the community water their gardens.

“Look! Look! Our plants are sprouting because they get enough water. This dam is a blessing to us. We don't eat a meal without a salad because we plant cabbages, beetroot, green pepper, tomatoes, butternut, spinach and potatoes”, said 65-year-old Duduzile Zulu.

The Father Albert Hanon Dam is a multipurpose centre that accommodates everyone who comes for help.