How I spent my Tuesday morning: the Jaguar F-Type edition

After signing in, I amped myself up with free coffee and learnt from a ripped and tattooed driving instructor what I would be doing over the next couple of hours.

It was quite simple, really: after teaming up with a colleague (Sean Nurse from AutoTrader), we would have to complete three unique challenges in the refreshed 2020 Jaguar F-Type. Yep, the one with the new nose that makes it look like a racing I-Pace.

There were three teams in total and as on most press junkets, the winning team would receive a prize (cue Hot Wheels).

Challenge 1: The race for no pace

When you think of sports cars, you don't think about saving fuel. Jaguar, however, thought otherwise.

Armed with a R2,422,700 F-Type R P575 AWD Coupé, Nurse and I were tasked with driving out to three different locations around the Fourways area with the objective of registering the lowest average fuel consumption.

I elected to take the wheel because poor life choices have necessitated that I now squeeze maximum miles from a tank of gas. As such I'm good at hypermiling. How good? Well, with a careful right foot and the AC turned off, we returned with the Jaguar's trip computer reading 11.5l/100km.

Prospective owners won't give a damn, but this is pretty darn impressive for a sporting coupé fitted with a supercharged 5.0-litre V8 kicking out 425kW and 700Nm worth of torque.

With points scored and the instructor's eyebrows raised, it was time to move on.

Challenge 2: In it to spin it

After trying our hand at another Hot Wheels trackset (each challenge started off with one, usually some kind of elaborate loopdeloop), Nurse and I were escorted to the skidpan where we were given the key to a R1,511,800 F-Type R-Dynamic P380 Convertible – what has to be the pick of the range, with its supercharged 3.0-litre V6 sending 280kW and 460Nm straight to the rear wheels.

Sure, it might not have the same raw fury as the P575 - but it makes up for this with improved balance. It just feels more chuckable, more nimble.

On the skidpan, we took turns whipping it through a series of exercises. The first required us to drift through two cones and then pull a full 360 around one of them.

The second was a memory game where the instructor showed us a flashcard filled with colour names. We then had to drive through coloured gates (marked by cones and placed randomly around the skidpan) in the same order that they were written on said flashcard.

The third saw us drive a tricksy gymkhana course around the skidpan in the least amount of time possible.

Now I thought I'd do quite well at this, but I made a series of rookie errors and lost our team valuable points. Luckily Nurse bought his A-Game along and managed to save face.

Be that as it may, challenge 2 served as a welcome reminder as to just how dynamic this Jaguar is – particularly this six-cylinder derivative. If you actually care about the overall driving experience and still place handling and poise above crazy horsepower, then the P380 is definitely worth looking at. For most people it's all the F-Type they will ever need.

With my pride in tatters, it was time to mosey on down to the centre's Dynamic Handling Platform: a sizeable slab of perfectly smooth asphalt measuring some 180m long and 30m wide. Here we were reunited with the F-Type R P575 AWD Coupé and two new exercises in which Nurse and I could hopefully add a few more points to our overall tally.

Usually slaloms are kind of straightforward, but the one cooked up by our instructors was anything but. Basically we had to accelerate hard and snake our way from one side of the platform to the other. Upon arrival, we were then required to reverse the way we came without hitting any cones and within a stipulated cut-off time.

I knew I would fluff the reversing bit so my aim was to dispatch the first half with maximum attack. And I did. 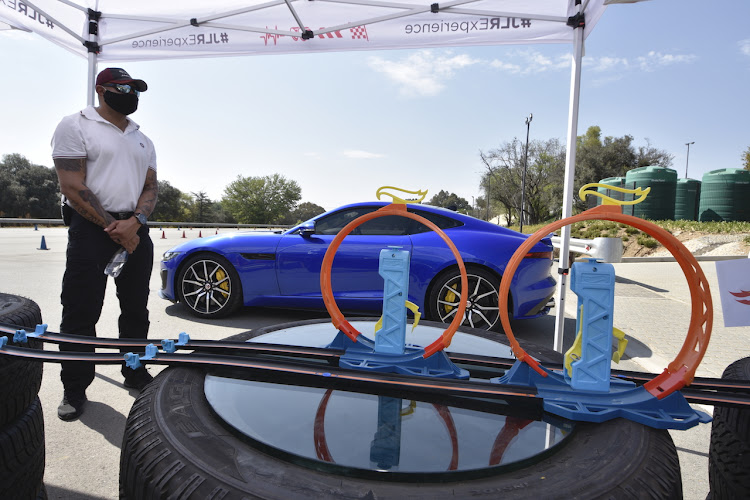 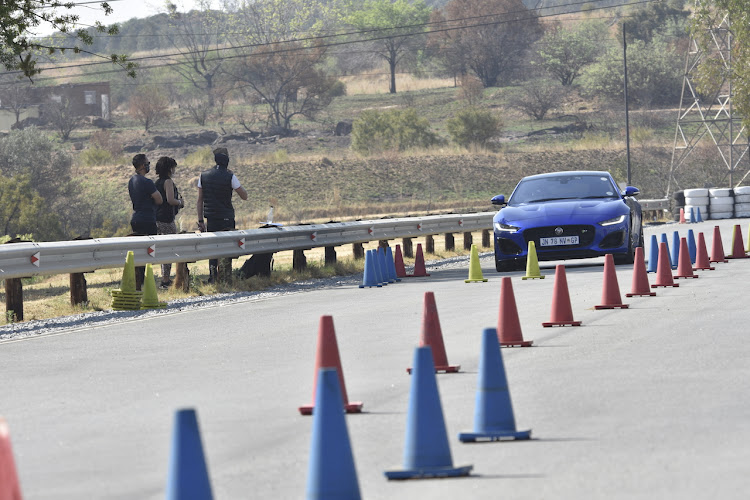 Thanks to its all-wheel drive traction and powerful (not to mention linear) supercharged V8 engine, the P575 is an immensely fast bit of kit. Especially out of the blocks. It closes 180m like you close walking the distance between your kitchen to the dining room – in a matter of seconds.

With its upgraded suspension system set to Dynamic Mode, it also shrugs off rapid changes of direction with minimum fuss. Body roll is minimal and the front end bites with an enthusiasm that gives you the confidence to push the car even harder.

Jaguar has also done some work on the electric power steering, and it shows: you now get a much better idea about how those front wheels are engaging with the black stuff.

Of course, driving in reverse none of this really matters. I failed to score a single point as I glitched and lurched my way back to the starting box with all the grace and skill of a drunken pensioner afflicted with a bad neck.

Wondering if I had somehow in the night forgotten how to drive, it was now time to tackle the final exercise of the morning. This one, thankfully, involved no drifting or reversing. All we had to do was accelerate down a lane and time our braking point so that we stopped just in front of a row of cones. And when I mean just in front, I mean like 5cm away. Stop too far away and your efforts would count for nil.

Time mattered too. Do it all too slowly and your points reward would diminish. I aced the practice run, messed up the first timed run and then absolutely nailed the last one to stop with the car's front lip spoiler literally kissing those aforementioned cones. I was well chuffed with that.

I was also impressed with the braking performance of the P575. You see, a contributing factor to my accuracy lies in the excellent pedal feel. In this flagship F-Type it's easy to modulate braking pressure and also gauge how much more – or less – force you as the driver need to apply in certain scenarios.

This is an often overlooked area of high-performance vehicles and Jaguar has done well to get it so sorted.

So there - with the last bullet in the gun - I was able to redeem myself. Yay.

Challenge 4: No such thing as a free lunch

Well, no, actually there is - if you're a motoring journalist who's been out abusing somebody else's sports cars all morning.

After a brief prize-giving – our team won comfortably despite my myriad muck-ups – where Nurse and I were both presented with our very own Hot Wheels tracksets (I gave mine to him because of company policy), I headed upstairs to the TLC On The Track restaurant for a surprisingly good chicken pesto pasta and another coffee.

If you're ever in the area, I recommend stopping for a pitstop and checking out the rest of the Jaguar Land Rover Experience Centre facilities. They really are world-class.

And that, dear reader, is how I spent the first half of my Tuesday - while the rest of the working world shuffled papers, adjusted books and banged heads in corporate meeting rooms.

Union blasts Transnet over R9.9bn worth of irregular spending

Watch-outs of the week: travel pains, bank fraudsters and a false sense of security with warranties

AmaZulu and Orlando Pirates share the spoils in Durban

Did You Miss? The Sunderland Echo this week

Hamilton on course for record win after Portuguese pole