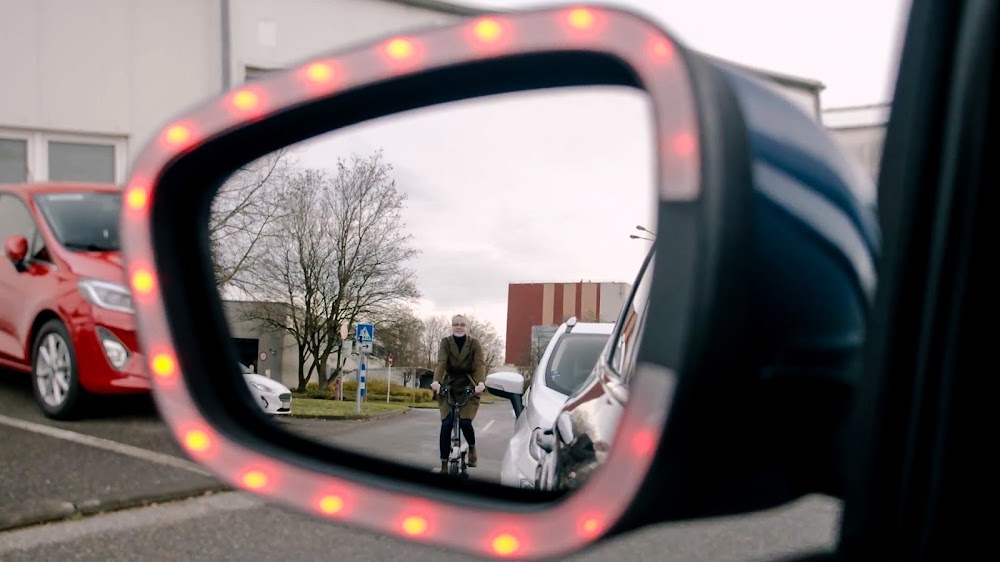 Bicycles and cars share a troubled road relationship at the best of times, and while cyclists riding two or more abreast can make car drivers see red, the tables are turned when cyclists become the victims of “car dooring”.

That’s when inattentive drivers or passengers open the door of a stationary car into the path of a cyclist or motorcyclist, and it apparently causes thousands of accidents around the world each year. According to Ford, car dooring caused about 3,500 accidents in Germany in 2018 and results in 60 cyclists being killed or seriously injured in the UK every year.

In a bid to prevent this type of accident, Ford is to introduce an Exit Warning system for its cars that detects road users approaching from the rear and provides visual and audible alerts.

Using existing sensors that check the car’s blind spots, Exit Warning detects road users approaching on both the driver and passenger sides of the vehicle. An alarm sounds to warn the car occupant of danger, while bright red LEDs on the side mirror and door flash as a visual warning for cyclists.

The company is also working on a mechanism to momentarily prevent the door from fully opening until the Exit Warning system determines the passing road user is safely clear of the vehicle.

Ford’s prototype system is similar to the Safe-Exit Assist already offered by Kia and Hyundai, which won’t let occupants open the door if there’s traffic approaching from behind. The system is available in the new-generation Kia Sorento and Hyundai Tucson, which are headed for SA next year.

Ford plans to implement Exit Warning after testing the technology in the coming months, but hasn’t said which of its vehicles will offer the feature.

It’s part of Ford’s “Share The Road” campaign that seeks to foster harmony between motorists and bikers.

Ford also recently came up with the prototype Emoji Jacket, a wearable that features a brightly lit LED mesh panel to display emojis, indicators and the hazard warning symbol. The jacket enables cyclists to more easily and clearly signal their intent — and their feelings — to drivers and other road users.

The company has also produced an award-winning virtual reality experience so that drivers and cyclists can better understand the challenges of each other’s journeys.

“WheelSwap” enables motorists and cyclists to see how inconsiderate driving and riding can be at the least hair-raising — and potentially fatal — for their fellow road users. Initial studies show that after undergoing the experience, nearly all participants said they would change their behaviour.