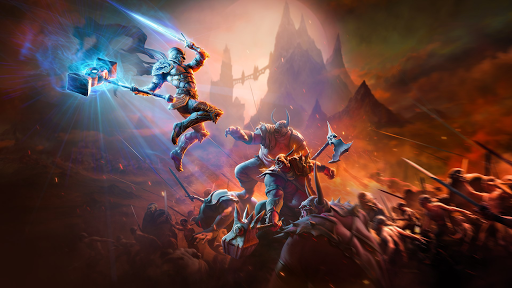 Confession time. I bounced off Kingdoms of Amalur: Reckoning before it was re-Reckoned. As someone who’d grown up with serious RPGs like Morrowind and Baldur’s Gate and had already played The Witcher 3 before, it seemed too simple and shallow at first glance. Having eye-rolled my way through a few Drizzt Do’Urden novels, the “Written by R.A. Salvatore!” tagline that was plastered everywhere wasn’t a huge draw, and the art created by Todd McFarlane looked more like Fable than Spawn. Still, it seemed like a decent enough game and had a cult following, so it was a pity when 38 Studios, the original developer, folded so spectacularly. I was curious to see what improvements Kaiko had made to bring this 2012 title kicking and screaming into the hell that is 2020, and I was ready to give it another chance.

Starting the game, I was struck by such a juxtaposition of horror and whimsy that can only rivalled by Roberto Benigni’s Life is Beautiful as the protagonist (naked, save for their underwear) slithers down a small mountain of bloated, rotting corpses only to be met by an adorable little exposition gnome.

Kingdoms of Amalur: Re-Reckoning takes place in a world inhabited by several mortal races and a few immortal ones – the Fae. Where the mortal races, you know, die, the Fae are instead reborn with all their memories intact. For millennia, the Fae came in two flavours – the Summer Court and Winter Court – both keeping the balance inherent in nature. Until members of the Winter Court became corrupted, started calling themselves the Tuatha, and waged war on the mortal races, looking to wipe them out entirely.

So far, the war has been decidedly in the Tuatha’s favour, as they are reborn after death while the goodies tend to stay dead. This is where the protagonist comes in, as they’re brought back to life by a gnomish invention meant to tip the scales and grant mortal races the same immortality enjoyed by the Fae. Side effects include amnesia, starting at level 1, and no longer being bound to fate the way everyone and everything in Amalur normally is. It isn’t long before you’re saving people who were destined to die and – I guess? – fetching items for NPCs that were never meant to be fetched.

There’s a surprising amount of depth to the RPG mechanics. Each new level grants you a skill point to spend on a variety of skills, as well as three ability points, which can be spread across the three attributes – Might, Finesse, and Sorcery – any way you see fit. As you put points into these attributes, you unlock more powers and become better at using the weapons and armour associated with that attribute. A focus on Might produces a fighter, Finesse produces a rogue, and Sorcery produces a mage. You can also split the points between classes to produce hybrids, and even all three to produce a jack-of-all-trades. By investing enough points into these classes, you unlock “Destinies”, which add buffs to enhance your chosen play-style. These points can be reset for a nominal fee by certain NPCs, so it’s relatively easy to try out new classes at any time.

The game controls well enough with mouse and keyboard but I was much more comfortable on a controller. I actually broke my Steam Controller out of retirement for it, where it had been languishing as a trophy proclaiming my nerd cred.

Unfortunately, while combat feels sublime, Kaiko did not update the inventory management system, which definitely feels like it was designed for consoles in 2012. And graphically, not much has changed in eight years. Textures are a little better, the shadows have been rejigged, and there’s native ultra-wide support. Thankfully, the cutesy art style has a sort of timeless charm to it. Just don’t expect any ray-tracing.

The more I played, the more I was taken aback by the amount of content on offer. Each new area is lousy with exclamation marks, but quest objectives tend to be grouped together, so it’s easy to complete a bunch and then head back to civilisation to turn them all in. Concentrating solely on the main quest should take about 30 – 40 hours, but throw in the numerous side quests, guilds, crafting, alchemy, and the included DLC, and the total play-time is closer to 200 hours.

Kingdoms of Amalur: Re-Reckoning
BOTTOM LINE
Somehow, much like its protagonist, Kingdoms of Amalur: Reckoning managed to cheat fate and rise from the dead. If nothing else, it gives us hope that other cult favourites might get the same treatment (I’m looking at you, Anachronox) and if there’s one thing we could all do with more of this year, it’s hope. If you had your fill of the original, there’s not much here that’s going to feel different, though there is a brand new expansion set to release next year. But if you missed out the first time around, this is a great way to experience it.
PROS
Levelling system that invites experimentation
Fun, arcadey combat
Loads of content
Written by R.A. Salvatore!
CONS
Not much of an improvement over the original
Clumsy inventory management system