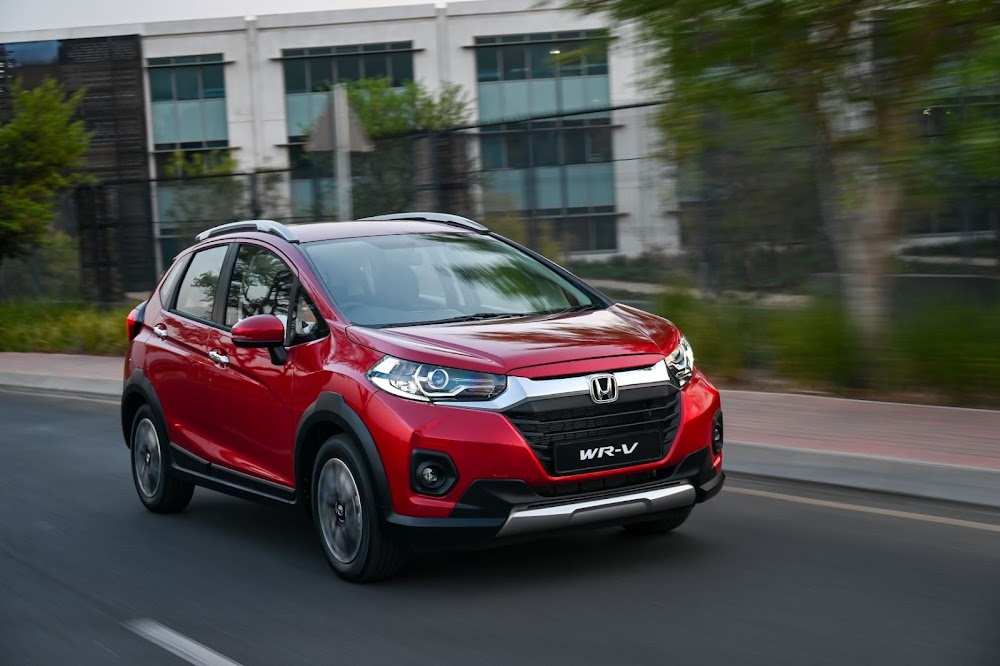 In case any of us forgot, Honda was a pioneer in the sport-utility vehicle and crossover arena. Their CR-V, which saw life in 1995, was among the earliest nameplates to a category now contributed to by virtually all mainstream manufacturers.

Of course, the model was dimensionally smaller than the present day version of the breed. Segments evolve, as everyone knows. Then there was the first generation HR-V, with its wagon-like styling, which the current example eschewed in favour of a more universally-accepted, hatchback-type configuration.

In 2016 a new acronym joined the portfolio: the BR-V. This model was essentially a reworked expression of the frumpy Mobilio seven-seater that preceded it.

Two weeks ago, Honda added yet another contender to the mix in the form of the WR-V.

Aesthetically, the WR-V ticks the boxes on the list of criteria for a compact crossover seeking to convey a believable sense of pluckiness. From the plastic cladding to its characterful face – replete with what seems to be a goatee – it looks the part.

If you are picking up some kinship to the Jazz, that is no coincidence, since the model shares most of its organs and structure with the musically-inclined sibling. This is, essentially, a Jazz that likes a bit of rock: its ground clearance is slightly greater (173mm) versus the 135.3mm of its counterpart.

No surprises for guessing where the interior takes its cue from either. Inside you will find the WR-V is a verbatim copy of the Jazz, including the impressive versatility of the rear section, whose seats can be reconfigured in a variety of ways. They call it the Magic Seat system.

Cabin quality is good, while the more generously-equipped Elegance model grade gives conveniences such as a reverse camera, cruise control and keyless entry. There are also subtler enhancements like a steering wheel wrapped in mock leather as well as a seven-inch touchscreen infotainment setup. Both the basic Comfort and Elegance feature fabric upholstery as standard.

Anti-lock brakes, electronic brake-force distribution, plus front, side and curtain airbags are included with both models. It has yet to be crash tested, however.

The Jazz scored five stars for adult occupant protection when ASEAN NCAP tested it in 2014. A four-star rating applied to the models with two airbags, though our local Jazz versions have six airbags, right from the entry-level 1.2 Trend.

A 1.2-litre choice is also the only option you can have in the WR-V. While we are addressing the limitations in choice, your colour options are limited to four rather drab hues – a shade of silver, one black, one white and a burgundy.

The normally-aspirated four-cylinder, endowed with the i-VTEC valve timing management system, is worth 66kW and 110Nm. It can only be had with a six-speed manual. Those looking for two-pedal ease are not catered for, which is likely to disserve the Honda. Performance was peppy enough, but  we drove the car at coastal altitudes. One could predict that in Johannesburg, with a full house of passengers and the air-conditioning at maximum, the WR-V may not feel as effusive as it did on the scenic launch drive.

This is the first time Honda has had such an offering in the compact segment. A bit late to the party, but if brand loyalists were avoiding the other cars on the list purely because of their affinity with the famed “H” emblem,  the WR-V ought to be welcome news.

Woodhouse flats evacuated as resident threatens to 'blow himself up'