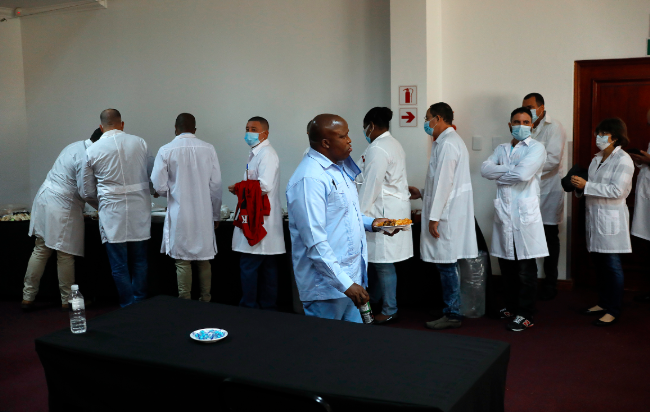 The issue of whether some subsectors within the broader tourism sector can ease back into operations sooner is under discussion by government.

Tourism minister Mmamoloko Kubayi-Ngubane convened an emergency special virtual meeting with tourism MECs from the various provinces on Friday, her department said in a statement on Sunday.Covid-19 lockdown: Need to move faster on relief, and split tourism...

An amount of R1.2bn was set aside to assist financially-distressed small-scale farmers. Of this, R400m has been allocated to beneficiaries of the government Proactive Land Acquisition Strategy. The remainder will be channelled to farmers mainly in the poultry, livestock and vegetable farming sectors.Out of 55,155 agri relief applicants, 15,086 were successful

For each job saved in manufacturing, the Eastern Cape provincial government will reward companies with R10,000.

This proposal was included in premier Oscar Mabuyane’s Covid-19 containment and mitigation plan, which he presented to President Cyril Ramaphosa at Port Elizabeth's Livingstone Hospital on Thursday, reports theWeekend Post.

The premier said the bonus scheme was among the incentives the provincial government could offer companies to retain jobs in the province.Let's pay companies R10,000 for each job saved: EC premier to Cyril...

High number of recoveries in Gauteng, with just 54 people in hospital

“Out of a total of 10,332 contacts traced — these are individuals who were in contact with people who tested positive for Covid-19 — 8,156 people have completed the 14-day monitoring period with no symptoms reported and therefore they are de-isolated,” he said, referring to departmental data.High number of recoveries in Gauteng, with just 54 people in hospital

'Moving to level 3 means lifting some restrictions on the movement of goods and people': Presidency

Alert #Level3 will entail more extensive reopening of the economy and the lifting of restrictions on the movement of people and goods. President Ramaphosa has been in continuous consultation with various sectors of society on management of the national state of disaster. pic.twitter.com/70JK6PtP8W

Differences of opinion vital 'to arriving at the best advice': Prof Abdool Karim

IN FULL: Professor Salim S. Abdool Karim's statement in response to Professor Glenda Gray’s comments on the Ministerial Advisory Committee (MAC) on Covid-19, which advises the government on its response to the pandemic.Differences of opinion vital 'to arriving at the best advice': Prof...

Learning from our elders: Planting veggies for the hard times ahead

“Before lockdown, l would wake up in the morning and go out job hunting,” says 21-year-old Candy Mayfair of Valhuise, Oudtshoorn. “But because l am in lockdown, l then decided to be productive.”

Mayfair had spent three years looking for a job without luck. When the Covid-19 lockdown started, she decided to get a vegetable garden going.

She says she developed an interest in gardening from her grandmother, who worked on a small holding outside Oudtshoorn. “My grandma had a big yard where she used to plant vegetables, and as a child l would help her with watering the garden,” she says.

*This article was originally published byGroundUpLearning from our elders: Planting veggies for the hard times ahead

Mkhize defends lockdown rules as scientists say they are being sidelined

Scientists, business and labour have delivered a stark warning to the government to fast-track the easing of lockdown restrictions, saying they are having little or no effect on stemming infections - but are killing the economy.

Some members of the ministerial advisory committee (MAC), the body headed by professor Salim Abdool Karim that advises the government on its response to the pandemic, have supported their colleague Dr Glenda Gray, who said yesterday that the lockdown has no basis in science and should be called off.Mkhize defends lockdown rules as scientists say they are being...

Cigarette ban 'a big failure in every way', says report

Economists behind an extensive survey of smokers say the lockdown ban on cigarette sales has been a spectacular failure and should be lifted as soon as possible.

More than 90% of the 12,000-plus smokers who completed an online questionnaire said they had bought cigarettes in spite of the ban.

On top of its failure to stop people smoking, the ban had strengthened illicit distribution networks that would now be difficult to dismantle, the economists said.Cigarette ban 'a big failure in every way', says report

Schools might reopen in June except those in 'hot spots'

More than 5,000 schools in Covid-19 hot spots across SA, including 929 private schools, will stay shut next month if the cabinet approves a new proposal by the basic education department.

TheSunday Timescan reveal exclusively that the department wants schools in Buffalo City, Cape Town, Johannesburg, Ekurhuleni, eThekwini, Mangaung and Nelson Mandela Bay to be regarded as being on lockdown level 5 when others around the country begin reopening on June 1.

Keeping these schools shut would affect 3.7-million pupils and 134,779 teachers.Schools might reopen in June except those in 'hot spots'