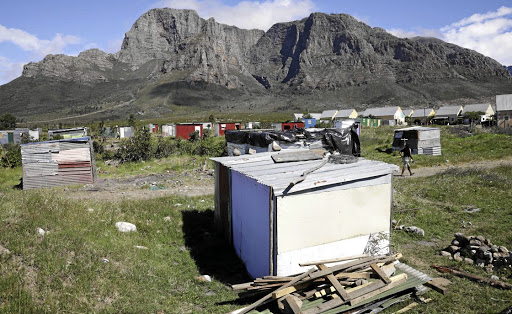 An unusual land dispute outside Stellenbosch is heading to court amid allegations of racial conflict between coloured and black residents of a small rural village.

A group of mostly black shack dwellers in Lanquedoc, a village founded over a century ago on part of Boschendal wine estate, is fighting to remain on vacant community land they occupied earlier this year. Some have already been evicted from shacks erected on the 17 hectare site which the municipality claims as its own — by virtue of an alleged donation from the Community Trust.

The shack dwellers say they are fed up with living squashed in people’s backyards in Lanquedoc, a mostly coloured farmworker settlement, within sight of vacant land originally intended for community upliftment when donated 25 years ago by Anglo American, former owners of Boschendal.

The backyarders say the Community Trust managing the land has betrayed them, by seeking to evict them rather than use the land to alleviate the housing crisis.

They claim the trust has secretly agreed to donate the land to the Stellenbosch municipality in return for “protection” against backyarders wanting to move there.

The land, two erfs adjoining Lanquedoc village, has been earmarked for low-cost housing development and is collectively worth about R44m. Backyarders claim the trust previously tried to sell the land to the Municipality for this amount.

“Housing in the valley is a burning issue for many residents particularly those living in informal housing,” said Lanquedoc Housing Association chairperson Thapelo Smith in an affidavit submitted to the Western Cape High Court on behalf of the backyarders.

“I estimate that about half of all the people working in the Dwars River Valley live in informal dwellings and in backyards, predominantly in Lanquedoc.

“Much of the initial conflicts between the community members following the recent occupation stem from racial politics within the community. The homeowners in formal housing of Lanquedoc are generally fearful that a squatter camp will be established on the periphery of the village. This settlement would largely be occupied by black residents,” Smith said.

The standoff is further complicated by confusion over the legal status of the land. Last month the municipality resolved to accept the land donation, in lieu of an unpaid municipal rates and services bill of around R600,000. Council documents seen by TimesLIVE confirm the council resolution to accept the Trust's donation.

However Dwars River Valley Trust chairperson Michael Fraser insisted the trust had never authorised the donation. “We haven’t signed anything,” he said. “We said to the municipality you can’t expect the assets of the beneficiaries of the valley to just be donated to the municipality without compensation.”

However the backyarders claim they are as much a part of the community as anybody else. They blame the trust for failing to use the land holdings intended to uplift the area.

“The desperate need for housing resulted in the backyarders moving onto [the land] and building their own informal housing structures,” Smith said in his affidavit.

The municipality declined to comment, claiming the matter was sub judice by virtue of being discussed in a closed council meeting. “The council resolution is a confidential process about which we are not allowed to respond in public,” said municipal spokesperson Stuart Grobbelaar. “The municipality intends to deal with the matter on its merits and given that there are several issues addressed in the papers, our decision on whether to be an active party to the case will be based on all the issues that form part of the court papers.”

Responding to queries last month the municipality insisted the trust had resolved to donate the land: “We have no reason to question that the resolution by the trustees, intending the donation of the land to the municipality, is not bona fide,” Grobbelaar said.

But an opposition member of the Stellenbosch council, Derrick Hendrickse from the EFF, accused the council of underhand dealings in seeking to obtain trust land without first checking that the trust had the necessary mandate from its community: “This is a typical example of how a council is making illegal decisions. Many times they do these things and then say, 'well take us to court'.”

“Now these guys [backyarders] have funding to take them to court.

“It is not just an infringement of the rights of the beneficiaries, this has compromised the integrity of the council,” Hendrickse said.