Ahmed Kathrada Foundation to celebrate his life in online documentary 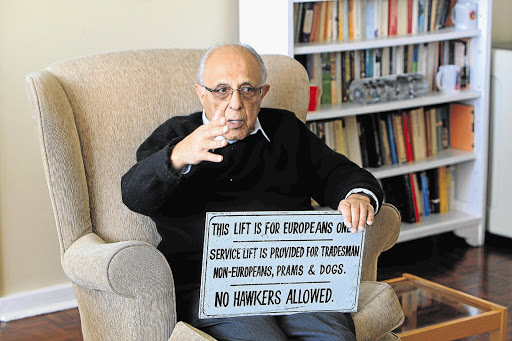 The Ahmed Kathrada Foundation is screening an online documentary commemorating the life of the struggle icon via the conferencing app Zoom on Saturday afternoon.

“This unique documentary, the last in which Uncle Kathy participated, features actual audio from the Rivonia Trial,” the foundation said in a statement.

It will be screened at 4pm via Zoom to mark the third anniversary of Kathrada's death.

The Rivonia trialist, antiracism activist and author, whose full name was Ahmed Mohamed Kathrada, was born on August 21 1929 in Schweizer-Reneke and died in March 2017.

“Kathy” was 12 when he joined a club affiliated to the Young Communist League and 17 when he was first arrested, for participating in the passive resistance campaign of the SA Indian Congress.

He met ANC leaders Walter Sisulu and Nelson Mandela in the 1940s and with them, a decade later, received a suspended sentence for organising a defiance campaign against apartheid laws and later stood trial for high treason. The men were acquitted but Kathrada was restricted to house arrest until he went “underground”.

In July 1963 police swooped on Liliesleaf Farm in Rivonia, where “banned persons” had been meeting. This led to the famous Rivonia Trial, in which Mandela, Sisulu, Kathrada and five others were jailed the following year.

Kathrada spent 26 years and three months in prison: 18 years were on Robben Island. While in prison he obtained a BA degree (in history and criminology), a B Bibliography (in African politics and library science), a BA honours (history) and BA honours (African politics).