Adios Diego — SA loved you too 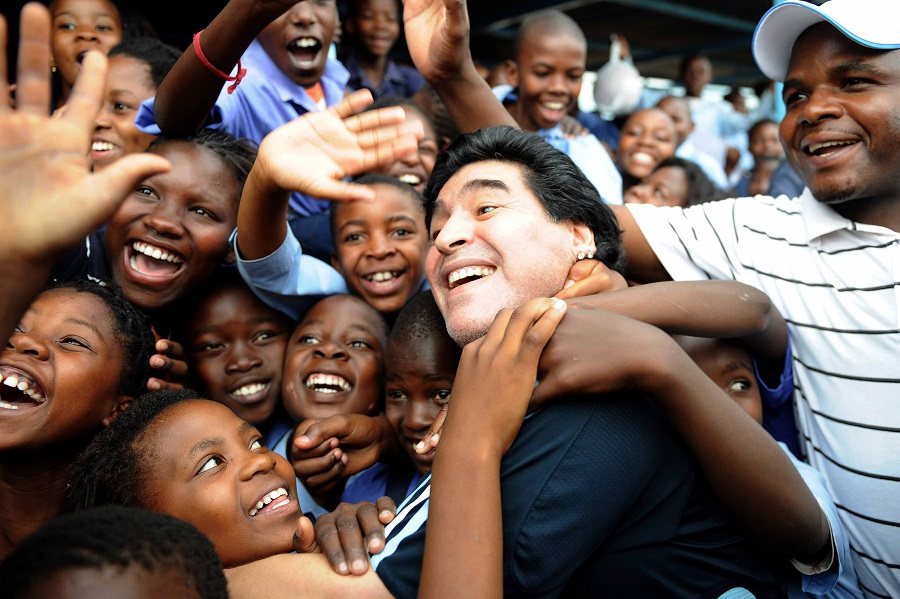 If Diego Maradona lived his life in heaven and hell, his split personality was every bit on view as the tour de force of the 2010 Fifa World Cup in SA.

In 2010 Argentina’s coach, who died on Monday aged 60, sprouted brash, often mad statements, made extraordinary demands about the team accommodation and imparted of his passion, warmth and humanity.

The 1986 World Cup-winner, 1990 finalist and Barcelona and Napoli superstar wholeheartedly supported the African World Cup long before its June 11 kickoff when many globally, including his grudgingly admired nemesis for the tag of greatest-ever player, Pele, expressed doubts.

While he did not come into contact much with South Africans in the rarefied air of Fifa’s cordoned-off existence for players and officials that is the space between team hotel, team bus, team training ground and match venue, the country hung on Maradona’s every word and action.

And what words and actions. Maradona had never made it to SA as a player, but what a tornado of unfiltered, unapologetic immediacy as a coach with his utterances. He guided the team, including his natural successor and one of the two best players in the world, Lionel Messi, to an ultimately tame quarterfinal exit, but was one of the stars of the greatest show on earth.

Maradona’s reported demands of his team hotel at Argentina’s base in Pretoria’s High Performance Centre were extraordinary. They were reflective of a personality who, in his superstardom, including years of notorious drug abuse of epic proportions, had become far removed from the kid from the slums of Buenos Aires who signed for Boca Juniors in 1981.

Builders had to be brought in for renovations costing R15,000, including adding a second bathroom in his room. The two bathrooms included two state-of-the-art bidets, valued then at more than R3,000 each, which included a “heated seat, a warm air blow-dryer and front and rear bidet wands”, the Daily Mail reported.

Other requests, the UK paper said, included “a demand for rooms to be painted white”, “10 hot dishes to be served every day”, that “ice cream be available at all times” and a “South African braai at least once every three days”.

Maradona’s actions were at times as outrageous. In training he had players on the side who lost practice matches line up in the goal mouth and the winning side pelt them with shots.

Players from Argentina’s losing XI in training are peppered with shots in the goal mouth by the winning side at the 2010 World Cup:

Ahead of the tournament, Maradona included relatively unheralded defender Ariel Garcé  — whose club, Colon, finished 14th in the Argentinian league that year — in his squad because the coach had a dream of his team lifting the World Cup and that was the only player he recognised.

Pulling into his squad announcement in a Mini, the legend ran over the foot of a cameraman, and exclaimed: “What an a***hole you are. How can you put your leg there where it can get run over, man?”

Quotes attributed to Maradona in 2010 include him saying, “Of course, as long as the women do all the work”, when asked if he allowed his players to have sex at the tournament. When they defended the controversial Jabulani match ball, Maradona said Pele should “go back to the museum” and that then-Uefa president Michel Platini thought he “is better than all the rest”.

Diego Maradona runs over a cameraman just before announcing his 2010 World Cup squad in Argentina.

Maradona had a dig at Pele for not supporting the SA World Cup, saying: “When the tragedy happened [a terror attack shooting on the Togo team bus at the 2010 Africa Cup of Nations in Angola], a certain coloured gentleman who played No 10 didn’t believe the World Cup could be played here. But SA answers him, ‘Yes it can’ — the World Cup begins.”

Maradona’s lack of a filter, and fallibility, mostly only endeared him to his supporters, and made him more human, and the effect was the same in SA.

His support and friendship, despite his obvious lifestyle extravagances, of global revolutionary and socialist figures such as Cuba's Fidel Castro and, closer to 2010, Venezuela's Hugo Chavez, endeared him to most South Africans.

In a pre-tournament visit to Kgotlelelang Primary School in Soshanguve and Lowe Middle School in Ga-Rankuwa, where pupils dressed up in Argentina’s blue and white colours, he was reportedly close to tears.

“I have received many welcomes in my football career across the world, but the warmth you have shown me will make me not forget this day in my lifetime,” he said. “With each kiss and every hug, I felt I had a friend.”

Maradona’s mystique and obvious adoration by his players could only carry Argentina so far, and some of the erratic squad selections seemed to eventually take their toll in the 4-0 quarterfinal humiliation to Joachim Loew’s slick Germany at Cape Town Stadium.

In the post-match press conference, Maradona was characteristically melodramatic, yet his pain also plainly obvious, and deeply human.

“The day I stopped playing football could have been similar,” Maradona said, choking back tears. “But this sadness is very strong — it is tough.

“I lived through this in 1982 [when holders Argentina exited in the first round], but I was too young and I didn’t realise the importance of things.

“Today I am almost 50 and I am mature. This is the toughest thing in my life.”

Maradona’s second goal – the 'Goal of the Century' – in the 1986 World Cup quarterfinal against England.

Many South Africans have choked back tears since the news of Maradona’s death. He was the champion of the little man, enemy of imperialism and hero to the impoverished.

He was the ordinary lover of the game of millions’ complete footballer with the ball at his feet. Maradona gliding past opponents was a sight unparalleled in the sport, and perhaps in sport.

No-one who loves football could tire of watching his second goal — the Goal of the Century — against England in the 1986 World Cup quarterfinal. The first — the Hand of God goal, which Maradona claimed as revenge for the Falklands War four years before — is viewed by some as plain cheating. To many in the developing world it is a symbol of standing up to the superpowers, like Muhammad Ali saying: “I ain’t got no quarrel with them Viet Cong.”

As much as the world mourns the loss of a personal hero to so many individuals, SA will feel a personal tinge at his death, too. Adios, Dieguito, we loved you too.

Fewer protests in 2020, but that doesn't mean people are happier