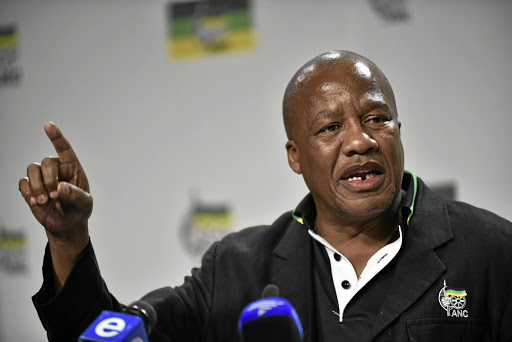 Jackson Mthembu died with his boots on, working for the people of SA.

This was the moving tribute ANC deputy secretary-general Jessie Duarte paid to the late minister in the presidency on Thursday after the shocking news of his death from Covid-19 related complications.

President Cyril Ramaphosa announced on Thursday afternoon that Mthembu had died earlier on Thursday after being diagnosed with Covid-19 on Monday January 11. The news sent shock waves around the country.

“I am struggling to process that he is gone, but he is gone ... Our brother is gone and he is not going to come back,” said Duarte, whose devastation could be seen as she addressed journalists on Thursday afternoon.

Duarte said: “We have lost a remarkable person for the ANC. He has come a long way with the ANC, from a young student in the 70s. Comrade Jackson grew into one of those formidable political actors in the country who sincerely believed SA could be transformed to make a better life for all of its people.”

She described Mthembu as an outstanding organiser in what used to be the Eastern Transvaal, and said he grew into somebody who joined the government — but primarily he was the voice and the face of the ANC and the government for many years.

She added that in the past couple of months SA would see Mthembu conducting media briefings and communicating decisions of the national coronavirus command council and cabinet on the Covid-19 pandemic.

“We have lost a really important person in our lives and we believe that the space that he took will never be filled very easily. We will always love him and miss him dearly. And we hope that as we go on in the next couple of days, we will find a way to heal ourselves and to understand that the real issue here is that we all have to mind the period we are in and that Covid is not playing with anybody.

He would stay late into the night to perfect a statement so that the statements were accurate and factual.

“Unless we take matters into our own hands and we are careful, we wear our masks and keep social distancing, and we do not attend gatherings at all, we will be losing many, many more valuable South Africans,” she said.

On his work matters, Duarte said Mthembu had an incredible work ethic.

“He worked long hours. His belief was you did not leave a job undone. He was meticulous about preparing statements that needed to go out, even when it meant working late into the night, we have worked with him here at Luthuli House.

“He would stay late into the night to perfect a statement so that the statements were accurate and factual ... He had a great sense of humour, an ability to communicate very easily with people and to draw people into a conversation.”

However, she said, he could also be quite firm.

“He could be stern, when he needed to. But he also lost friends, he made friends in his life. The friends he has will be his friends forever. We’ve lost a person who was very loyal to the country, put the country first, at all times and defended the ANC at every turn.”

Mthembu brought to the party’s national executive committee, a quality debate and understanding of the people.

“Jackson Mthembu was not somebody who lived in a cloud, he did interact with people and therefore he understood what the challenges were and could communicate articulately. He was articulate but considerate,” Duarte said.

She said Mthembu was not afraid of defending what needed to be defended.

“He defended what was the truth. If it was the truth, he defended it. That was his bottom line. He was somebody who believed that you did not run away from criticism, you would always get criticism when you are the governing party and therefore you should expect to be criticised, but that the same time you must be ready to answer back with fact and reality.”

Duarte said that sometimes Mthembu answered in a manner which suggested that he was attacking somebody in the ANC, but it did not matter to him.

“To be a spokesperson of the ANC is not the easiest job in the world and I think he did it excellently. He has been an excellent minister in the presidency, leading and co-ordinating the debates and discussions on Covid-19.”

Meanwhile, justice and correctional services minister Ronald Lamola described Mthembu as a father figure, a guider and someone who was eager to see people grow.

Speaking to TimesLIVE just moments after the announcement of Mthembu’s death, Lamola said the ANC and the country had lost a great leader — and that he, personally, had lost someone he saw as a father figure.

“It’s not a nice thing, particularly for us who worked very well with him. He was almost like a father figure for us and, ja, you know, things happen,” Lamola said, seemingly at a loss for words.

“I’m sure even you guys [the media] enjoyed working with him because he was not a difficult guy. He would engage, he would be cordial and all that,” he added.

Lamola said he and his comrades had looked up to Mthembu, who was always available and willing to  provide guidance.

Even in the cabinet Mthembu would chastise and guide his colleagues, Lamola said.

“We are heartbroken and really dejected at this big loss for the ANC and for the country, and for ourselves who are the young ones. As we were growing as people we were looking up to him, who gave us guidance from time to time.

“If he was not agreeing with you, he would tell you you’re out of order and call you to order. Even now in the cabinet, he would call you and say, 'you are out of order'. But he would always give you a task and space to grow and to understand the whole of government,” he said.

Ramaphosa described him as an “exemplary leader, an activist and lifelong champion of freedom and democracy”.

“He was a much-loved and greatly respected colleague and comrade, whose passing leaves our nation at a loss,” Ramaphosa said.

He’s not dead because what he stood for, a truly nonracial SA, cannot die.

Panyaza Lesufi, the Gauteng education MEC and ANC deputy provincial chairperson, said Mthembu would continue living through the ideals he believed in and stood for.

Having met him 35 years ago as a young person, Lesufi echoed Lamola’s remarks that Mthembu was a groomer. He said he was at the time a young government spokesperson with no formal training but he knew he could rely on Mthembu for constant guidance.

He said Mthembu could be relied on no matter what.

The only way to fight against the virus that has now robbed the country of Mthembu’s greatness was to fast track the vaccination, Lesufi said. He said people must be taught how the vaccine works and more unemployed South Africans should be brought in for training on how to vaccinate to assist the government to cover the entire country in a short space of time.