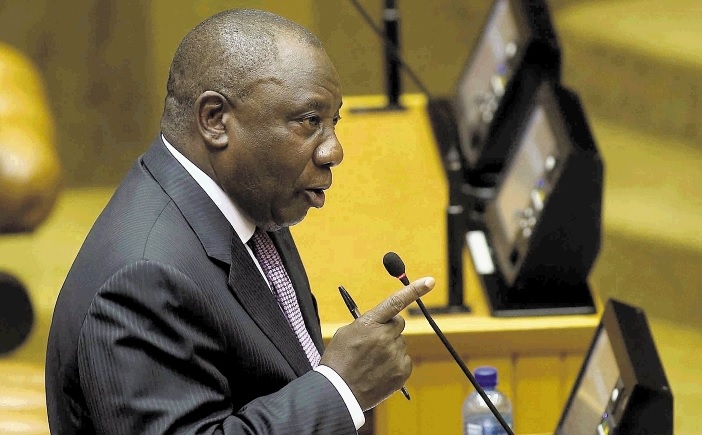 President Cyril Ramaphosa has unveiled an "emergency action plan" to combat violence against women and children, including the urgent release of more than R1bn to tackle the scourge.

In a special address before a joint sitting of parliament on Wednesday, Ramaphosa said government was collaborating with multiple sectors of society on the action plan to ensure that it is fully implemented within the next six months.

In an speech that lasted an hour, Ramaphosa said it was time for the country to close ranks on the raping and killing of young girls and women by men.

The president said five intervention areas would be introduced by all law-enforcement authorities, including parliament, the SA Police Service, judges and magistrates.

These include new measures to prevent violence against women, beefing up the criminal justice system, steps to enhance the legal and policy framework around sexual offences and other forms of gender-based violence, and measures to improve the economic power of women.

Ramaphosa told MPs from the two houses of parliament, the National Assembly and the National Council of Provinces, that he wanted them to prioritise amendments to various pieces of laws to ensure strict and harsher sentences to perpetrators of violence against women and children.

He reiterated his call for those convicted of killing and raping women not to be considered for parole.

"This emergency action plan will be driven by an interim steering committee located in the presidency and co-chaired by government and civil society organisations," he said.

The president said the job of the steering committee would be to "co-ordinate" rapid response at a national level.

"In this way problems at places like police stations and courts, and challenges such as the availability of rape kits and delays in DNA testing, can be channelled to the relevant authorities very quickly."

Describing the scourge of gender-based violence as "not a problem of women" but "a problem of men," Ramaphosa said government would also be introducing a mass media campaign targeting young men to change the way they relate to women.

Ramaphosa said the campaign would also extend to law-enforcement officers such as the police and judicial officers.

The police are often criticised for poorly probing rape cases while some magistrates and judges have been criticised for not enforcing harsher or minimum sentences required by laws on gender-based violence.

"The focus will be on men's groups and formations, the youth at risk and offenders inside prisons as well. This will be merged with prevention and education in schools.

"Women's rights and gender power relations will be part of life orientation in the school curriculum. As part of this campaign we're going to provide gender-sensitivity training to law-enforcement officials, prosecutors, magistrates, policy makers and ensure that those who are found in breach of their responsibilities in this regard are held to account."

Ramaphosa announced that cabinet on Wednesday decided that R1.1bn should immediately be set aside from the current budget toward the implementation of the emergency action plan.

He said he would also be lobbying the private sector to set up its own fund to finance measures to root out gender-based violence.

He said he had appointed former Tanzanian president Jakaya Kikwete and his Mozambique counterpart Joaquim Chissano to conduct a "fact-finding mission" in SA on the recent spate of violence against foreigners.

Ramphosa said people were correct to be concerned about the role of foreigners in the economy.

"We share their frustration that some SA employers are employing foreign nationals over locals to undercut wages, turning workers against workers and this is where the real problem is and where the confluence of violence takes place."

Ramaphosa said all business people operating in SA, regardless of their nationality, were expected to obey the laws of the country.

He said government also wanted to "regulate how people from other nations can own businesses, and participate in certain types of businesses within the small, medium enterprise centre".

Legal experts hail the issuing of arrest warrants against politicians

Sisi, what's the use of voting? asks Pietermaritzburg resident

Honda treats its seven-seat BR-V to a makeover

Five killed at brewery in another US mass shooting

'Scara' Thindwa on Kaizer Chiefs: 'I'll be honest with you‚ I don't like the way they play'

'Electricity is a right and we must not pay for it': Andile Mngxitama on Soweto shutdown