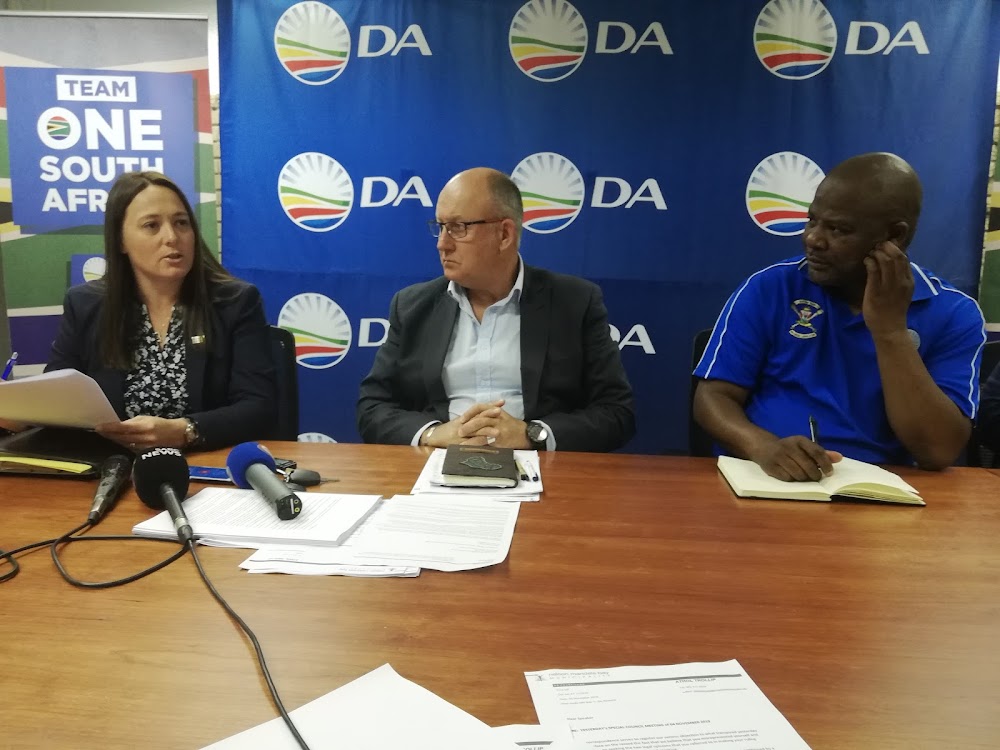 The DA in the Eastern Cape is calling for co-operative governance minister Nkosazana Dlamini-Zuma to place the Nelson Mandela Bay municipality under administration.

“There’s nothing happening as far as governance is concerned. For months, standing committees have not been sitting and council is dysfunctional.

“This city is collapsing and junior officials are running the city,” he said.

Dlamini-Zuma’s spokesperson Lungi Mtshali said Dlamini-Zuma was aware of the trouble in the metro, saying she had discussed it with the provincial Cogta.

“You must remember that [section] 139 [of the constitution] is a provincial competency and it is the province that requests the minister’s concurrence in instituting 139. I would assume that people know this.

“The minister will sit with the province and look at what the situation is to see if it warrants 139 [being implemented] and between the two, they would agree to invoke that section.

“As it stands now we haven’t received a letter from province asking for concurrence to invoke section 139,” Mtshali said.

On Monday, the special council meeting meant to debate the motion of no confidence in Mandela Bay mayor Mongameli Bobani was marred by threats against councillors, with deputy mayor Thsonono Buyeye allegedly having received life-threatening text messages during the sitting.

Council speaker Buyelwa Mafaya revealed that a day before Monday's meeting, two shots had been fired at her neighbour’s house, in an attack she believed was aimed at intimidating her.

Bhanga: "We'll be doing everything to force the #ANC to disband this municipality and open it up for a new election. We're also going to meet with business people and civil society organisations who can assist us to take action again the mayor and acting city manager."

“We felt that the political leadership of this minority government can't run this city. They've broken every piece of good governance left by the DA. We even got conditional grants of R200m under the DA, but now we are the worst municipality when it comes to irregularities,” he said.

“The DA has done everything to remove Bobani and even offered to help the ANC govern. The only thing left is for this municipality to be disbanded. We are putting it to the ANC to disband this municipality and go to an early election.

“We want a re-election and to compete against the ANC in a new ballot,” Bhanga said.

DA caucus leader Athol Trollip said the party’s 57 councillors in the metro were willing to give up their salaries to save the metro.

“We're not prepared to just get salaries as councillors and not do our work. We want to do our work for the people of this city and show that they can have a good city.

“We want the voters to choose again who they want to run this city,” he said.

Trollip said the provincial and national government departments were ignoring the metro by failing to implement section 139 of the constitution, placing the city under administration and dissolving the council.

Trollip: "We live in a party of fear mongering which is completely unacceptable. There is a universal agreement that Cllr Bobani is the real cancer in this council. He's the reason for the collapse in this municipality."

He said the Cogta MEC Xolile Nqatha had written several letters but had failed to do anything.

“Bobani is a member of the UDM but he leads the municipality [in a coalition] which is made up primarily of ANC members. The ANC will not remove Bobani because he is ANC councillor Andile Lungisa’s proxy.

“The ANC are not only contaminated by their participation in Bobani’s government, the ANC is actually the government,” Trollip said.

Last weekend Nqatha sent a letter to Bobani asking him to explain within seven days why the city’s administration was crumbling.

Provincial Cogtaspokesperson Mamnkeli Ngam said on Tuesday that Bobani had not yet responded to the letter and that the MEC would write again to Bobani, giving directives on what needed to be done, with deadlines.

DA MPL Vicky Knoetze said: “Section 139(3) would take effect in the form of a notice of dissolution and this would happen in 14 days unless council is dissolved before.

“When council is dissolved, province takes over legislative and executive functions of the city.

“Councillors would lose their authorities and rights as councillors and an administrator would be appointed by province to ensure the running of the city and municipality functions,” Knoetze said.

Bobani said the DA had lost the motion of no confidence against him and that this was another attempt to get rid of him.

He said the DA knew that section 139 would not be implemented and that Trollip must “eat his sour grapes”.

Put these stats in your pipe and smoke 'em: NDZ​

If you're smoking in your car, be prepared to prove where and when you got them: Cele

[HIGHLIGHTS] The Manila Times Business Forum 2020: Business as Usual Under the New Normal