The only way to honour the late ANC KwaZulu-Natal provincial spokesperson Ricardo Mthembu is to unite the General Gizenga Mpanza region.

This was the sentiment expressed by ANC provincial chairperson Sihle Zikalala as he delivered Mthembu's eulogy on Saturday.

“Comrade Ricardo believed in unity of the movement, unity must always be a priority for each and everyone, the only way to honour comrade Ricardo is to unite the region and reclaim activism and let the ANC be present throughout this region,” Zikalala said.

General Gizenga Mpanza region, which is the third biggest region of the ANC in KwaZulu-Natal, has had its fair share of instability since Mthembu vacated his position as mayor after he was sworn in as a member of the provincial legislature.

The region was due to elect leaders in a conference however the Covid-19 pandemic has led to the postponement of all ANC conferences.

The jostling for power from different groupings within the ANC last year led to the town of KwaDukuza being without a permanent mayor. Efforts to elect a mayor were sabotaged by ANC members in council.

However Zikalala told party members and mourners that reclaiming activism and focusing on a common goal of working for the poor, something numerous speakers characterised as Mthembu's greatest achievements, would be the best way to honour his legacy.

Mthembu, 50, succumbed to Covid-19 on Wednesday, having spent several days in the intensive care unit of a Ballito hospital to which he had been admitted.

At the time of his death, he was chairperson of the Cogta portfolio committee in the provincial legislature and the ANC’s provincial spokesperson.

He had previously served as mayor of KwaDukuza municipality for eight years while he also served in three terms as chairperson of the ANC’s KwaDukuza region (now General Gizenga Mpanza) before being elected to the ANC provincial executive committee in July 2018.

Zikalala praised Mthembu for being instrumental in building ANC and ANC Youth League structures in the KwaDukuza area in the early 90s.

Zikalala said Mthembu’s funeral, which was restricted to a few leaders and family, was not enough of a send-off for a leader Mthembu's stature.

“I hope that one day the ANC would get a chance to celebrate this life of comrade Ricardo the way it is supposed to, the way he deserves, however for today, we have to adhere to the regulations,” said Zikala.

He also thanked Mthembu’s family for “not hiding” what led to Mthembu’s sudden death.

“Other people become afraid, but you told us that he died because of Covid-19. That is important for the awareness that this virus kills, that we need to protect ourselves,” he added. 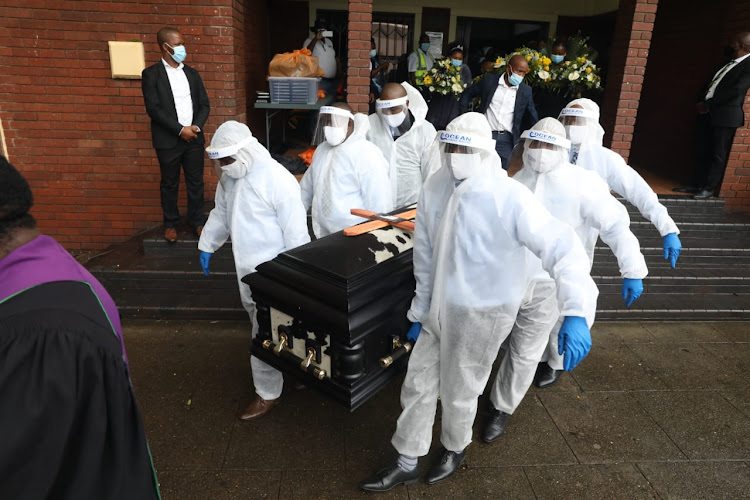 Cosatu to Ramaphosa: Clamp down on corruption or we'll part ways