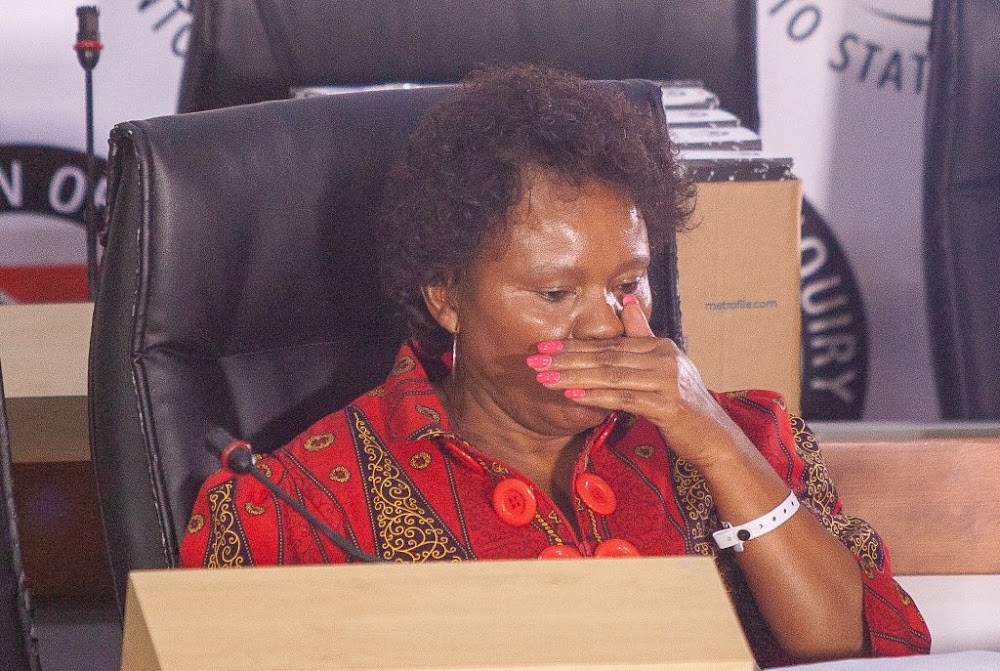 The state capture commission has had the attention of South Africans for more than two years, and in 2020 was again lauded for continuing to lift the lid on allegations of corruption in state-owned enterprises.

Deputy chief justice Raymond Zondo and evidence leaders had their hands full dealing with witnesses who testified on Eskom, SAA and Denel, among other companies.

However, South Africans also witnessed some unforgettable, and sometimes comical moments, from witnesses who either refused to respond to questions or “forgot” critical information needed by the commission to do its work.

Here are six unforgettable moments from the Zondo commission this year:

The former environmental affairs minister denied most allegations levelled against her by former Bosasa COO Angelo Agrizzi in January 2019. The commission heard that among perks allegedly enjoyed by Mokonyane from Bosasa were a grocery shopping list, sponsored family burials and security upgrades at the minister's home.

Mokonyane rubbished the allegations, saying the grocery items were donated to the local community during the festive season.

Zondo andevidence leader advocate Kate Hofmeyr were subjected to a series of non-answers from Vuyisile Ndzeku, a former director at JM Aviation SA. His testimony was supposed to be around an allegedly dodgy contract of R1.5bn between SAA and Swissport.

The commission heard that Swissport paid R28m to Ndzeku's business, who in turn received his cut of R2.5m. Asked to elaborate on this, the businessman told the chairperson “I don't know,” “I don't remember”. He insisted on his stance even as Hofmeyr showed him bank statements which showed the payment was made to his account.

“I don't know. It was not paid to JM? It was paid to me? OK, that's good, I'm happy,” he said. Zondo's attempts to get answers from Ndzeku proved unsuccessful.

Ndzeku also told Hofmeyr he did not remember when he got married.

Hofmeyr: “You don't remember when you got married?”

Another state capture moment that had South Africans on the edge of their seats was the application by former president Jacob Zuma to have Zondo recused as the chairperson of the commission.

Zuma had cited that the “friendship” between him and Zondo would result in a conflict of interest. Muzi Sikhakhane, counsel for Zuma, said the choice of witnesses by the commission was questionable and created a narrative that Zuma was being unfairly targeted by the commission.

“This application seeks to persuade you to look honestly and sincerely at some of the comments you have made that would frighten a witness who is sitting before you. I am appealing to your honesty about your own errors,” said Sikhakhane.

Zuma later walked out of the commission after Zondo dismissed his application to have him recuse himself from chairing the forum.

Public enterprises minister Pravin Gordhan was cross-examined by the lawyers of former SA Revenue Service (Sars) boss Tom Moyane, a year after Gordhan testified before the commission and accused Moyane of acting with malice and wanting to advance state capture by taking legal action against him in 2015.

Moyane had challenged the minister for approving the early retirement of revenue service deputy commissioner Ivan Pillay. He also accused the minister of establishing the so-called “rogue unit” at Sars.

The minister told the commission that he stood by his claims that Moyane wanted to advance state capture.

Gordhan admitted that the unit did exist at Sars, but denied that it was illegal, as implied by Moyane's lawyer Dali Mpofu, who said the financial institution had no authority by law to investigate the illegal smuggling of cigarettes and other illicit trade.

Citing the National Strategic Intelligence Act of 1994, Mpofu said only police, army and intelligence are allowed to operate such a unit.

Mpofu said the accusations against Moyane were motivated by, among other things, racism, pettiness and undermining African people. He also said this was because Moyane had exposed illegal activities that Gordhan allegedly left behind at Sars.

The minister denied this.

Dudu Myeni: 'In case I incriminate myself'

The former SAA chairperson hardly gave Zondo and Hofmeyr any responses, citing her right to remain silent in case she incriminated herself.

Myeni was quizzed about a range of allegations including security upgrades to her Richards Bay home by Bosasa and her qualifications, but for most of what was supposed to be a testimony, she told Zondo and Hofmeyr, “chairperson, may I please not answer just in case I incriminate myself”.

She also got into hot water for revealing the name of protected witness Mr X, after Zondo warned her to keep his identity concealed.

Former SAA board member Yakhe Kwinana was in the hot seat at the commission and was asked to respond to allegations of tender irregularities regarding a catering contract which had been initially awarded to LSG Sky Chefs, but was later reversed and given to SAA Air Chefs, despite its financial troubles. SAA Air Chefs is a subsidiary of SAA.

Kwinana told the commission that she saw nothing wrong with denying LSG Sky Chefs the contract because SAA Air Chefs offered the same services.

“I would not go next door to buy fat cakes and leave my child’s fat cakes here. Even if I had a challenge with them, I would say reduce the baking powder, add this and that so it could be to the customer’s satisfaction.”

Ramaphosa sends condolences to Diko following death of her husband