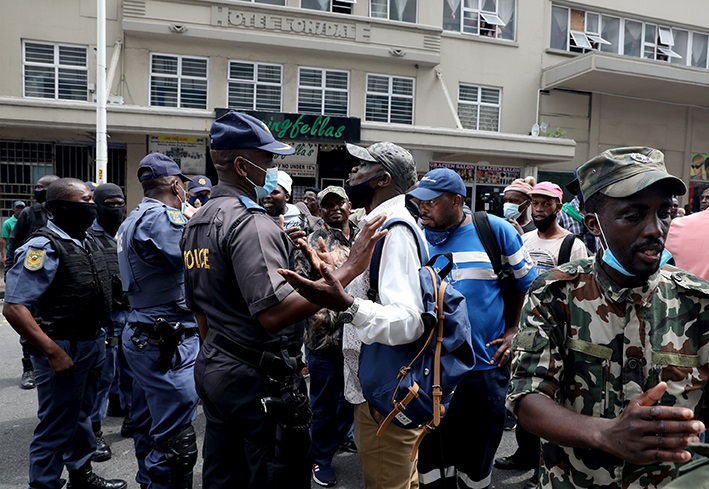 The ANC in KwaZulu-Natal has condemned attacks on foreign-owned shops in the Durban city centre on Monday.

Members of the Umkhonto we Sizwe Military Veterans Association (MKMVA) and truck drivers took to the streets to target foreign-owned shops and stalls, demanding their immediate closure.

This was the third move in a campaign to “rid” Durban of foreigners by the military veterans in the past month, including one that took place at Durban's The Workshop shopping centre and Berea precinct.

ANC provincial spokesperson Nhlakanipho Ntombela said, “We have come out clearly and consistently condemning that thing [targeting of foreign nationals]. There are no people who will play a role of a vigilante group in a normal society. There are foreign-run shops that are operating legally. We told the police to play their role.”

But the MKMVA has not disputed the legality of foreign-run businesses. They have previously said they want them shut down because immigrants are taking jobs from South Africans and selling drugs.

Before the attempts to shut down foreign-owned businesses in Durban, the veterans had struck an alliance with unemployed graduates, truck drivers and hawkers.

These groups joined them in two marches to the ANC provincial offices where they demanded that foreigners be banned from employment in transport, hospitality, education, medical sectors and strategic SOE positions, including truck driving, employment as domestic and farm workers.

They further called for refugee camps to be built for foreigners “until all illegal immigrants are deported back to their countries”.

Ntombela said the grouping was barking up the wrong tree. He indicated, however, that the party attempted to intervene and discuss their concerns.

“As the ANC, we met with them regarding their structure and we were very clear with them that the ANC can't speak on the issue of foreigners, truck drivers ... That is not an ANC competency but certain government departments.

“We even put them in contact with who they should be speaking to. The street vendors even met with the eThekwini municipality to raise their grievances. There is nothing more the ANC can do. The police must play their role,” he said.

However, Bishop Sandile Ndlela of the MKMVA said the protest was aimed at taking a stand against a system which allowed foreigners to take control of the CBD and get jobs before South Africans.

The situation has been closely monitored by members of the SAPS' public order police and metro police.