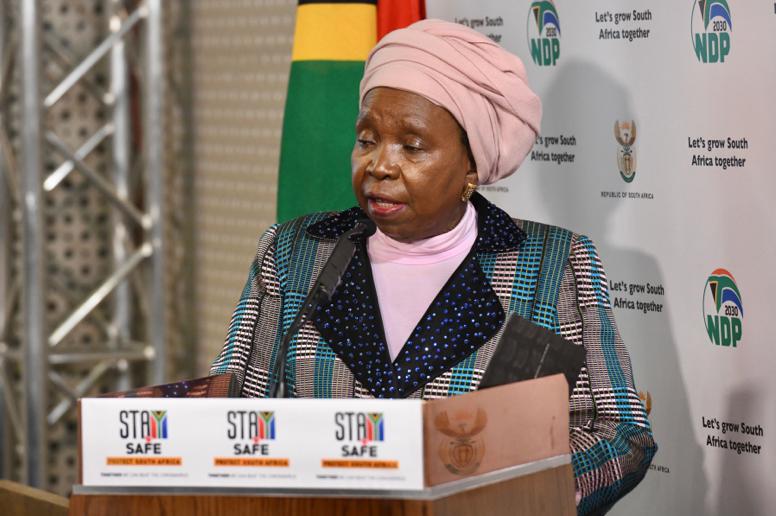 Co-operative governance and traditional affairs (Cogta) minister Nkosazana Dlamini-Zuma says districts must alert communities if coronavirus infections start to rise again after the move to alert level 1 of the lockdown.

Gazetting the changes announced by President Cyril Ramaphosa on Sunday night, she said: “All district municipalities must, after consultation with its local municipalities in its area, alert communities within that district of the increasing number of infections that could lead to that district being declared a hotspot.”

The minister called on citizens to observe all the Covid-19 health protocols and remaining restrictions to avert a possible resurgence in infections.

She said hygiene protocols to curb the spread of the virus, including the wearing of masks and physical distancing, remain vital.

Only children under the age of six are allowed to be out without wearing a mask, and those   engaging in “vigorous exercise in a public place, provided the person maintains a distance of at least 1,5m from any other person”.

“It is important to note that even as the country moves to alert level 1 and economic activities increase, a face mask that covers the nose and mouth remains mandatory.”

Attendance at a funeral is limited to 100 people, provided the venue can accommodate a distance of at least 1.5m between mourners. If it cannot, no more than 50% of the capacity of the venue may be used, subject to the same distancing rule. The duration of a funeral is restricted to a maximum of two hours.

Night vigils and after-funeral gatherings are not allowed.

Nightclubs may not reopen.

Retailers must ensure customers keep a distance of at least 1,5m from each other, hand sanitisers must be used and masks must be worn.

The curfew is now from midnight to 4am, which allows venues such as restaurants and cinemas to remain open until 11pm for staff and patrons to be home before “lights out”. Exceptions include people attending to a security or medical emergency, arriving on a flight or travelling to or from an airport provided the traveller has a valid boarding pass as proof of flight or a copy of the airline ticket.

All faith-based, religious, social, political and cultural gatherings are permitted but limited to 100 people or less for indoor venues and 250 people or less for outdoor venues. If the venue is too small to hold the prescribed number of people observing a distance of at least 1,5m from each other, then not more than 50% of the capacity of the venue may be used, subject to strict adherence to all health protocols and social distancing measures.

Bus and taxi services may not carry more than 70% of the licensed capacity for long distance travel but may operate at full capacity for shorter trips, subject to health protocols including the wearing of masks.

Anyone flouting the regulations is, on conviction, liable to a fine or up to six months in jail, or to both.