Young local artists that have wowed the world in 2019 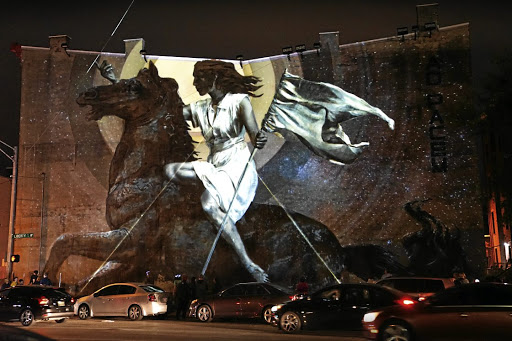 Creative energy from the southern tip of Africa has been whirling around the globe, impressing everyone it encounters. Here are some of the year's highlights.

Nicholas Hlobo's art graced the limited edition cover. Hlobo was in the news recently again for being asked by Louis Vuitton to decorate one of its limited edition handbags with his art.

In February, TIME magazine featured a painting by Limpopo-born artist Nelson Makamo on its "The Art of Optimism" cover. Makamo, who wants to change perceptions of African creativity, paints large-scale portraits of young people. He appeared with 34 others whose work TIME magazine believes is changing how we see our world.

The cover was noticed by Trevor Noah, the New York-based, Joburg-born comedian, who decided to interview Makamo for The Daily Show. Impressively, in another first for an African entertainer, Noah's Loud & Clear world tour sold out at Madison Square Garden in November.

Back on the art front, power couple Swizz Beatz and Alicia Keys snapped up an entire booth of paintings by Joburg artist Thenjiwe Niki Nkosi at Frieze Art Fair in New York. The artworks by this local talent are destined for The Dean Collection - a global community art and music centre that will open soon in Upstate New York.

Back in Braamfontein, DJ Black Coffee scored a penthouse in the same building as artist Stanley Hermans; only months before Lesley Lokko had left the University of Johannesburg as director of the Graduate School of Architecture to take up a position as dean of architecture at the City University of New York, moving into Harlem in Manhattan.

Down the road on Juta Street, artist/gallerist/curator Banele Khoza's BKhz hosted exhibitions and art salon-style conversations. Banele's gallery is one of two black-owned gallery spaces in the area (including Artivist, which is a multi-platform space featuring food and a live music venue called UNTITLED). Banele's BKhz studio and gallery is proving to be a much-needed safe space for LGBTQ youth.

Close by are the "bad boys" of the art world, MJ Turpin and Matthew Dean Dowdle, at Kalashnikovv Gallery, whose curatorial style and choices have continued to push buttons and boundaries this year.

MJ and Matthew's collaboration with organisers Mandima Qunta and Treyvone Moosa sparked the African queer culture series Le Grand Ball at The Tennis Club in New Doornfontein (on the grounds of the Gauteng Tennis Association). Le Grand Ball has been getting a lot of ink - it's been celebrated in the local press and is now part of the official line-up for Afropunk Joburg on Constitution Hill over New Year.

The Stevenson Gallery moved out of Braamfontein and into Parktown North, also opening offices in Amsterdam in the Netherlands.

England's Brexit-torn London saw the arrival of SA's longest-running art gallery, Goodman Gallery (with Emma Menell at the helm). Their mission was quoted in the British Financial Times Weekend Edition: "Goodman is contributing to global conversations about art history, politics and critical thinking," it said.

Kalishnikovv and Guns & Rain (both galleries) ventured abroad with a presence at African art fair 1.54 at Somerset House in London, as did Cape Town's Ebony/Curated, which headed to Paris for the art and design fair Also Known As Africa (AKAA) while at New York's 1.54 Contemporary Art Fair, SA photographer Phumzile Khanyile's Plastic Crowns image was the centrespread image for the diverse showcase that saw Chris Rock and Willem Dafoe drop by.

One of the world's leading artists' book collectors, Joburg's Jack Ginsberg, whose legacy has been his encouragement and support for SA book arts and whose artists' book collection is unrivalled in Africa (including more than 3,000 artworks plus a unique archive of an additional 3,000 items on the history and development of the book arts genre) can now be visited (by appointment only) in the Wits Art Museum building.

Downtown Joburg got hit by xenophobia in the latter part of the year but the Standard Bank Gallery was the site of the celebrated exhibition, A Black Aesthetic, which showcased SA's black modernist artists.

At the Venice Biennale in Italy the SA Pavilion, curated by Gabi Ngcobo, placed the curator on the international arts and culture map and secured her a guest curatorship at the newly opened Javett Art Centre at the University of Pretoria in Tshwane.

JavettUP forms part of an unexpected, acclaimed trio of privately funded museums gifted by collectors to SA over recent years. Cape Town has the other two: Zeitz MOCAA and the Norval Foundation. The Javett Foundation gift aims to be a celebration of SA heritage and the curators have located treasured artworks from private and corporate collections across SA.

SA curator Storm Janse van Rensburg returned from Savannah, Georgia, trading his position at the Savannah Museum of Art for a head curatorship role at Zeitz MOCAA in Cape Town.

The original mural is deteriorating and will soon no longer be visible, but thanks to the woodcuts the legacy of the project will remain. All six woodcuts form part of Kentridge's retrospective exhibition at the Zeitz MOCAA currently on in Cape Town.

Artist Lady Skollie not only "made money" - a R5 coin with a design by the artist was minted by the SA Reserve Bank this year - she has also been busy in other artistic spheres.

She has DJayed at the opening event of the new Latitudes Art Fair in Joburg, exhibited at Everard Read and did talks at the Turbine Art Fair with Mmakgabo Helen Sebidi.

Sebidi did a limited edition print with The Artists' Press.

Local graffiti queen, Faith47's US takeover seems unstoppable - recently in the form of a street installation at the Blink Light Festival in Cincinnati. Faith47 has also completed her longest mural in the 21 years she's been an artist. It's up in the mural-friendly city of Philadelphia.

The inspirational art book of the year is Explore! Awesome South African Artists by former JoburgArtFair drector Cobi Labuscagne (published by Jacana Media). It's a comprehensive and delightful way for youngsters to find and identify their SA art heroes, which are plentiful - if this great year in art is anything to go by.

Cruise Cape Town project to lure cruisers to the city

Do you need a wellness holiday?

Should you or shouldn't you? Here's a correct guide to reclining on an airplane

Exposure to alcohol ads can lead to teenage drinking

'Shout out to my friend, my fiancee, my Queen, My Heart'

WATCH | The morning after #Budget2020: How the budget affects you

BTS Performs "ON" at Grand Central Terminal for The Tonight Show

New Collective Bargaining Agreement Will Be Put To A Vote