Who wore it best: Somizi vs Billy Porter 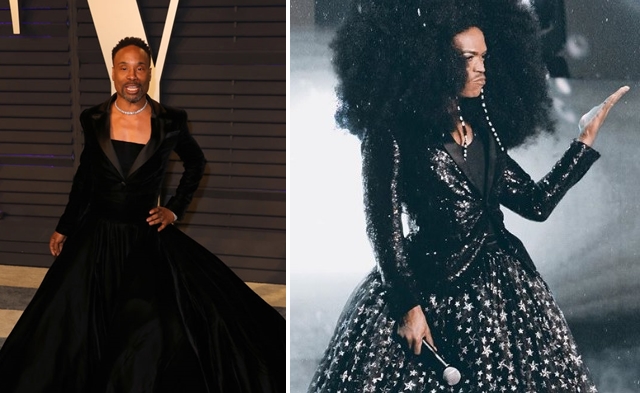 Pose actor Billy Porter had tongues wagging at the 2019 Oscars when he arrived in a custom black-and-white ensemble by Christian Siriano. The top half resembled a classic tux jacket, complete with a bow tie, while the bottom half — a full velvet skirt — was pure drama.

Speaking to Vogue, Porter said his goal with his red carpet looks is “to be a walking piece of political art every time I show up”. Mission accomplished, Mr Porter!

The look was apparently a nod to an outfit once worn by the late Hector Xtravaganza, known as the grandfather of New York's alternative ballroom dancing scene, who also served as a consultant for Pose.

It seems our own choreography legend, Somizi "SomGaga" Mhlongo, may also have taken some style inspiration from Xtravaganza. He wore a similar look, but in bright orange, to the Feather Awards in 2018.

SomGaga repeated the silhouette at the 2019 Sofn’free Awards on Sunday. And, when you see photos of the pair of Porter and Mhlongo together, you can't help but notice the similarities between their outfits, leading us to ask: who wore it best?

Mhlongo's black blazer sparkled with sequins, while his skirt was strewn with sparkling silver stars. He also kicked things up a notch with a big afro wig — don't forget he was hosting a hairstyling awards ceremony.

So, who wore it best? We’re going to seem bias by saying "local is lekker" and giving it to Mhlongo, but there’s a logical explanation for our choice: while Porter seemed to have set out to make a statement, SomGaga was just being true to his own exuberant personal style.

Can we get a super splendiferous for SomGaga?