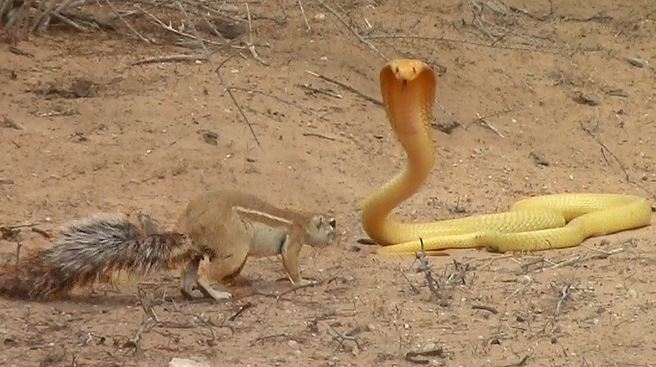 A brave ground squirrel mom put up a good fight battling it out with a persistent Cape Cobra.

A safari guide for Leo Vantage Safaris, Dave Pusey, captured the duel and shared the video with LatestSightings.com from the Kgalagadi Transfrontier Park.

In the tense battle, the squirrel mother takes advantage of her agility, hopping from side to side to distract and defend herself against the venomous snake.

The deadly snake tries countless times to bite the squirrel but the small animal's speed is unmatched as the snake keeps on missing.

Though the squirrel's young are not featured in the video, Pusey believes the youngsters were most likely close by and the squirrel wanted the cobra to move away so her offspring would be safe.

“We waited for the fascinating story to end and after about half an hour the snake took refuge in some bushes and eventually found a hole to slither into. The female squirrel then started relaxing and carried on with her business.

"It’s most likely that the squirrel had youngsters close by and just wanted the cobra to move away from the area.”