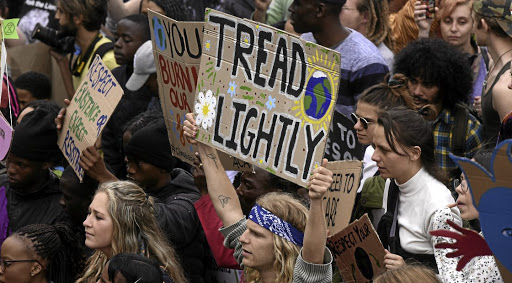 "What we need is a youth revolution, the emergence of a radically different way of thinking, characterised by wisdom, bravery and integrity, from the next generation of Earth stewards," said Dr Adriana Marais, theoretical physicist and astronaut candidate of Mars One in reference to Kiara Nirghin, featured below.

The youth are mobilising, as was illustrated when climate strikes took place across SA in September.

These three young activists are doing amazing things to make a difference.

Now in her late teens, Nirghin was 16 when she won the 2016 Google Science Fair Community Impact Award for the Middle East and Africa with her submission "No More Thirsty Crops". She created superabsorbent polymers from avo skins and orange peels.

"Kiara found an ideal material that won't hurt the budget in simple orange peel, and through her research, she created a way to turn it into soil-ready water storage with help from the avocado," said Andrea Cohan, Google Science Fair programme leader.

Nirghin suffered bacterial meningitis, undiagnosed bilharzia and severe weight loss, and had to postpone her school career for hospitalisation.

The Joburg teen's book, Youth Revolution, covers her journey from the hospital bed to the international stage as the winner of the science award, and looks at issues surrounding stagnant youth innovation, while considering the dangers of lacking diversity in STEM (science, technology, engineering and maths).

In July, the matric student from Wynberg Girls High in Cape Town travelled to Belgium and Greece representing SA as a youth climate ambassador for the Climate Democracy and Justice Summit in Europe.

This year she also started the African Climate Alliance to unify climate activists across Africa fighting for climate justice.

When Sampson was 11, she travelled with her family around Africa in a truck that used no petrol or diesel. To fuel their trip the Sampson family used recycled cooking oil from hotel kitchens.

While in Brussels and Greece, Sampson discovered that the African Charter is the only policy in the world to relate environmental rights (including ecological destruction) to human rights.

Sampson has written an open letter to President Cyril Ramaphosa imploring him to take climate change seriously: "Unless we act now, we risk drought, wildfire, floods, disease, food insecurity and total economic collapse. Water shortages, hunger and health risks resulting from extreme weather will impact our continent's poor the most," she wrote.

In March, Mgogwana, an 11-year-old from Yomelela Primary School in Khayelitsha, Cape Town, led a strike of more than 2,000 children outside parliament against climate inaction.

"By not implementing policies that protect our environment, you are robbing us of an opportunity to end poverty, and stealing our future. The crisis is now! People are dying! Nature is crying for help ... hear us," says Mgogwana.

In the club she learnt about environmental issues affecting her direct community and the entire world. Mgogwana says: "It's cool to be interested in climate change."

Where in the world do you head post-coronavirus? Well, SA, says new survey