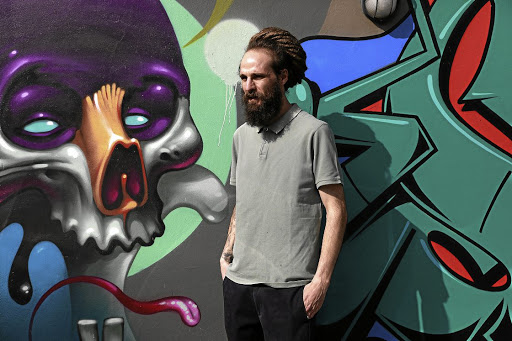 During June, July and August, a new series of R2 and R5 coins celebrating 25 years of democracy has gone into circulation. Apart from the milestone they commemorate, part of what makes them special is that each one has been designed by a young South African artist.

In total, six circulation coins (ordinary currency) and three limited-edition collectable coins have been designed. Though the artists are all well-known and celebrated in art circles, they're quite an edgy bunch for the sort of officialdom one might associate with an institution like the South African Mint Company.

Rasty Knayles is best known as a graffiti and tattoo artist. Lady Skollie is celebrated, but her work is provocative and confrontational, often dealing explicitly with sexual, racial and feminist themes. Peter Mammes, who lives in London (and has had work exhibited on the London Underground) often explores the aesthetics of ugliness and the grotesque in his sometimes-cartoonish work, which also subverts the standard understandings of history.

The list goes on, but that's enough to give you a sense that the artists who were approached to design this series of coins weren't necessarily the safe figures you might have expected.

"My immediate thought when I saw the other artists [was], Wow, they haven't been conservative!" says artist and architect Shaun Gaylard, who designed the 24-carat gold R500 commemorative coin depicting the Constitutional Court. Gaylard is known for his beautifully detailed architectural illustrations.

The approach the Mint took was a calculated decision to break with tradition. Tumi Tsehlo, MD of the SA Mint, says that when deciding on the themes for this series of coins, the Mint for the first time sought out the opinions of ordinary South Africans, and "deliberately looked at getting the perspectives of younger people".

"If you look at how we actually came up with the themes, there was a bias towards getting insights and perspectives from the born-frees," says Tsehlo. He says it was about "making sure we are not just reflecting [the] whims of the current leadership at the Mint", but really creating coins that reflect what is important to the population, particularly those who represent the democratic era.

Tsehlo says the Mint wanted "the coins [to] represent issues our society is grappling with today".

"Coins are quite a special medium for people to understand the issues of the times in which the coin was issued," says Tsehlo. "We are always sensitive and alive to that role of coins at the Mint."

The Mint even commissioned a market research company to find out which elements and symbols of democracy were most meaningful to born-frees.

What emerged was a list of ideas closely associated with the Bill of Rights: the constitution, the right to vote, freedom of choice and expression, and so on. Eight main themes were identified.

A separate panel of experts nominated the artists. They represent diversity of backgrounds, but carry through the bias towards youth. The artists themselves seem universally delighted to have been invited to participate, and remarkably devoid of cynicism.

Pretoria-based Maaike Bakker, known for her logic-defying abstractions representing patterns and systems often repeated to the point at which they seem to dissolve sense itself, says that when she was contacted, she "was definitely taken by surprise. It's an unusual request, and also an exciting opportunity." Bakker designed the environmental rights coin.

Neo Mahlangu, who designed two of the coins (the final selection was made by a panel who weren't shown which design was by which artist), says with pride: "It's a big deal that so many million coins are going to be in people's hands. It's affirming. I'm very happy about it, and my parents are also very happy about it."

The artists were briefed in detail about the coin-manufacturing process, and most commented on the twin challenges of designing for the small surface of a coin, and for such a huge audience. "I've never done something for such a big or diverse audience," says Bakker.

Mahlangu, who designed the coins relating to education and children's rights, explains that the artists were advised to "design coins that are straight to the point [so that] when you see it, it makes sense". They had to be accessible and inclusive.

Gaylard says that for him, "the Constitutional Court was the obvious choice". Though, through his main occupation as an architect, working to a brief was familiar territory for him, he says that he was given plenty of flexibility to do "exactly what I wanted". He worked closely with the Mint's team to make sure that little details, such as his trademark line extensions, carry through his original design aesthetic.

Rather than an icon, the likes of Mahlangu, Knayles (freedom of movement and residence) and Bakker all played around with symbolism and narrative. Bakker says that to avoid oversimplifying the message or being too literal, she had to create a subtle but complex visual hierarchy, so that each element of her design speaks to the others, and nothing is overshadowed or lost.

To represent the right to education, Mahlangu depicts building blocks, a book and a mortar board. "I wanted to have symbols that encompass levels of education as simply as possible," she says.

For children's rights, however, she chose a simpler image: "I just wanted to draw extremely happy kids - kids that are mid-laughter - because I believe that their vulnerability and their zest for life is something that we need to really cherish." She adds: "I also included a little girl in there. I had to include a little girl."

Lady Skollie's rock-art-inspired snaking voting queue on the R5 coin, representing the line "to live and strive for freedom" in the national anthem, cuts through the noise with beautiful simplicity.

The Mint's gamble on edgy artists has paid off - the result is disarming and uplifting. It's hard to be cynical, either about the rights that the coins represent, or the integrity of the artists who designed them.

Bakker says with infectious enthusiasm that she is most looking forward to the moment when she encounters the coin she designed in circulation, which for her "will make it become a reality".

"We are mindful of reflecting the hopes and dreams of our country, not just reflecting what is, but what we hope … for us as a nation," says Tsehlo.

"We need to tell ourselves stories that demonstrate that we believe in ourselves beyond what we have been able to achieve."

At George Floyd Memorial, Brother Says: 'Everybody Wants Justice for George. He's Going to Get It'

Here’s How to Budget During Coronavirus, Whether You’ve Lost a Job or Want to Prepare for

Marlo Mortel on his inspirations behind his "quarantine songs" | PEP Live