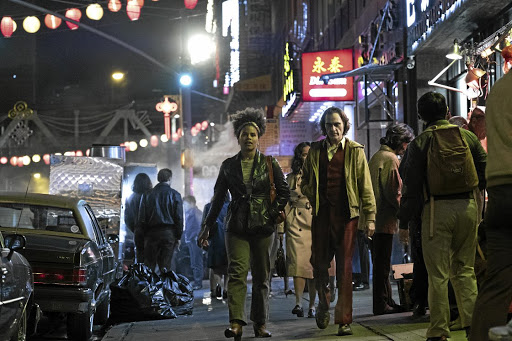 What if a comic book movie wasn't a superhero movie? What if it was stripped of all fantasy and derring-do and recast in grim reality and the style of vintage Martin Scorsese? No heroes, no fight sequences, no damsels in distress.

Now that sounds truly fantastical. Yet here it is. Todd Phillips's Joker is a re-invention of a movie genre, elevated above all by a frighteningly good performance from Joaquin Phoenix.

This Gotham City is a grimy landscape of garbage-strewn streets, rats and rampant hoodlums that resembles Taxi Driver-era New York and shot in the same sickly light. But you gotta laugh, right?

Well, you do if you're Arthur Fleck. He is physically compelled to do so by a neurological condition that causes him to guffaw hysterically - and usually out of context. He's in desperate need of the mood stabilisers dispensed by his social worker. But then she has her funding cut, signalling a sociopolitical commentary that will gradually bubble up and infuse the primary story.

In the meantime, where can he go, this semi-professional street clown and skinny momma's boy, after he loses his job? Into stand-up comedy, of course - a milieu where damaged depressives can make a living out of their dysfunction. And from there - or so he hopes - onto the TV talk show fronted by Robert de Niro's cornball host. By this point the film has set off alarm bells of recognition for anyone who knows Scorsese's The King of Comedy, but the casting of De Niro in the Jerry Lewis role from that film is a neat inversion.

WATCH | The trailer for 'Joker'

For this is a voraciously postmodern movie. It's not just Scorsese; there are numerous other 1970s reference points. Example: the opening in which Fleck chases thugs down the city blocks in clown costume recalls Popeye Doyle giving chase in a Santa outfit in The French Connection. The soundtrack, too, is canny: you recoil at a Gary Glitter tune before realising that he too was a heavily made-up entertainer who became a personification of evil.

But what about The Caped Crusader? This is not his movie. We get a few brief glimpses of Bruce Wayne, a few more of his father, an overbearing magnate who may remind you of a certain New York real estate billionaire.

The political subtext that emerges is more than evident and surprisingly angry for a mainstream blockbuster - just another way in which this film breaks the mould. Where on earth did all of this come from, Todd Phillips? It certainly wasn't there in frat boy comedies Road Trip, Old School or The Hangover.

Phoenix is electrifying and alarmingly convincing. Having played another, bulkier loner in Lynne Ramsay's 2017 You Were Never Really Here, he looks like he hasn't eaten or slept since. It's such a sustained feat of wide-eyed intensity and physical contortion that the mind boggles.

Yes, he deserves all the awards but he's almost too good for them. Not only does he outdo Jack Nicholson's Joker, he is on a par here with the actor of Cuckoo's Nest and The Shining.

For this is above all a portrait of a descent into madness and the madness into dissent. Forget the Dark Knight films, so widely lauded for their "darkness". Joker is dark in a horribly plausible way, and it's more nuanced than good vs evil - in fact it has a touching sympathy for its devil.

Looming over the film is the spectre of the 2012 Aurora, Colorado, cinema shooting, which left 12 dead and took place during a showing of The Dark Knight. Joker, surely, is a direct reaction to that, an impassioned cry for better care of the mentally ill. The film makes that explicit - almost too explicit - in Fleck's final monologue.

Like the best of the New Hollywood classics it references, this is a film that exhilarates and unsettles while having something to say about today. It is a graphic illustration of how damaged loners, if left untreated, can become dangerous to themselves and others. And not a bat in sight.

Staycations might be on the cards again for sun-seeking Brits