'Skeem Saam's' Clement just pretended to be Pretty ... doek and all 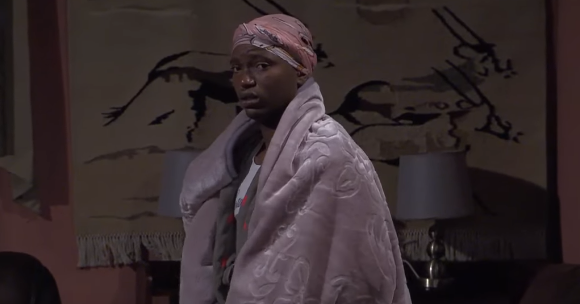 Can we just name Clement cousin of the year already? This after he pretended to be Pretty on last night's episode of Skeem Saam so that sis wouldn't get into trouble with her mom.

Pretty and Kat have been keeping their romance on the low, even lying about Pretty getting a job at his restaurant so that the pair can spend time together.

Kat was freaking out and spoke to Pretty about it, but even that encounter ended awkwardly, when she had to hide from his grandparents, who came to visit.

Kat was really nervous, especially when Pretty hid under the kitchen table where they sat down to have tea.

Meanwhile, back home, Clement was covering for Pretty and dressed up like her to try to fool everyone. He soon got his own chest pains when Pretty's mom found out.

WATCH FROM THE 7.20-MINUTE MARK IN THE VIDEO BELOW

It was super-tense. Clement was there, doek and all, and had to explain that he was covering for his cousin.

It also led to a tense confrontation at Nimza's house, when Pretty's mom came looking for her daughter and found nothing.

Over on social media, the streets were going crazy over Clement's trick and soon both he and the show were trending.

Fans came through with hilarious memes.

Clement is back from initiation school again 🤣🤣🤣🤣🤣#SkeemSaam pic.twitter.com/GA7BgVI0km

Wait until Kwaito and Mantuli sees Clement in a pink gown and fork #SkeemSaam pic.twitter.com/h40HwtS4XA

Those Clement and Pretty scenes left me in stitches 😂😂😂 #SkeemSaam pic.twitter.com/BcvcE2s3nc

MLS Owners Are Threatening A Lockout For the 2020 Season

Timelapse of a Cold Winter Day